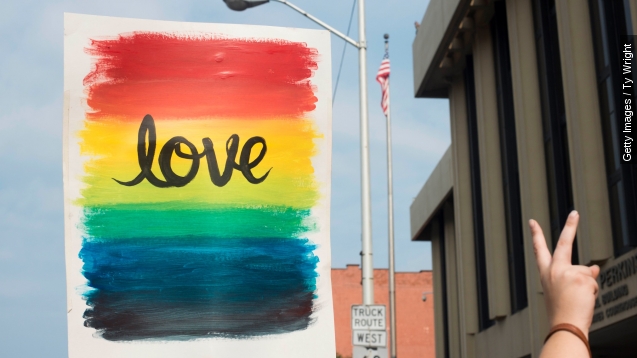 SMS
With Clerk In Jail, Ky. County Issues Gay Marriage Licenses
By Katie Link
By Katie Link
September 4, 2015
James Yates and William Smith Jr. are the first to be issued a same-sex marriage license after a county clerk was jailed for refusing to issue them.
SHOW TRANSCRIPT

After a monthslong standoff, it's time for some same-sex couples in Kentucky to book the honeymoon.

James Yates and William Smith Jr. made history this morning as the first same-sex couple to receive a marriage license in Rowan County, Kentucky. (Video via WPSD)

"We've tried to come down here, this was our sixth time, and it was successful so, yay. We're just happy to finally get married," Smith said. (Video via MSNBC)

The couple received the license from a deputy clerk after a judge found the county clerk, Kim Davis, in contempt of court for refusing to issue marriage licenses. (Video via WDRB)

Davis testified Thursday morning that she could not issue same-sex licenses due to her religion. (Video via WBKO)

She told the judge, "You can't be separated from something that's in your heart and in your soul."

Five of the six deputy clerks in Rowan County are issuing licenses in her absence. The only clerk who refuses is Davis' son.