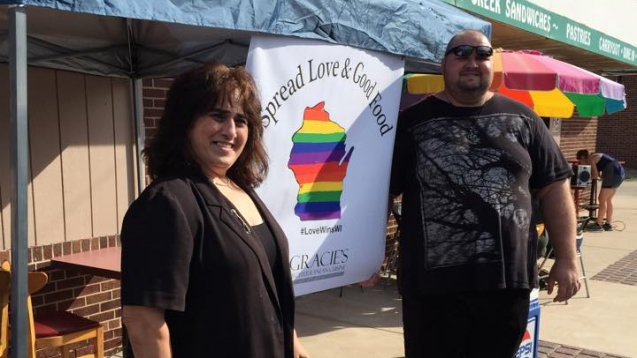 SMS
Wisconsin Woman Stands Up To Homophobic Internet Comment
By Kate Grumke
By Kate Grumke
August 7, 2015
A restaurant owner told a Facebook commenter she didn't want his business after he told her he didn't support her profile picture filter.
SHOW TRANSCRIPT

When a woman in La Crosse, Wisconsin, left a comment on a food Facebook group recommending her restaurant, she wasn't expecting it to lead to a political debate.

But according to Despina 'Gracie' Kozidis, it did. Another Facebook user commented saying he didn't like the rainbow filter on her profile picture, and wouldn't be supporting her Mediterranean restaurant because of it.

Kozidis told the La Crosse Tribune, after thinking about what to say, she wrote back: "That’s great! We prefer to have accepting, coexisting consumers. It seems we have come to an agreement that it is best for both parties that you do not visit my business. Thank you."

The comment was later deleted, but it still led to an outpouring of support for Kozidis' restaurant.

On Tuesday, the restaurant held an event called "Spread Love & Good Food," and many people showed up to show solidarity with Kozidis.

She told the La Crosse Tribune, "I lost one person, but I gained hundreds. I was crying actually."