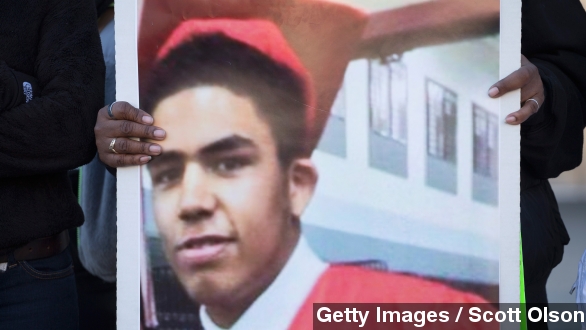 SMS
Hundreds Attend Funeral Of Wisconsin Teen Killed By Police
By Jasmine Bailey
By Jasmine Bailey
March 14, 2015
Saturday was the funeral for 19-year-old Tony Terrell Robinson, who was shot and killed by police in Wisconsin.
SHOW TRANSCRIPT

Saturday was the funeral for Tony Terrell Robinson, the 19-year-old who was shot and killed by a police officer in Madison, Wisconsin last weekend.

As expected, there was a large turn out of about 1,000 people in support of Robinson at Madison East High School. On Friday the Robinson family made an appeal to protesters to keep the funeral service peaceful which seemed to have been successful.

His mother told WITI, "I can't have a day where I'm trying to remember my son turn into something full of violence and hate."

The Milwaukee-Wisconsin Sentential Journal notes on Friday local religious leaders wrote an open letter to officials in the community. The letter said in part, "We commit to examining our own failure to challenge the racism and bias within our communities, in the ways that we do our theology and in our failure to preach and advocate for justice and equality."

"Apparently Tony hit one of his friends, no weapons seen"

"Police say Robinson then ran into a home across the street. Officer Kenny followed. ... the police say was attacked by the suspect," NBC reports.

The most recent information to surface about the March 6th killing of Robinson includes details from the preliminary autopsy report showing the young man was shot at least three times.

"An autopsy report showed Robinson was hit by bullets in the head, torso and upper right extremity. The report does not say how many bullets hit him," WKOW reports.

The officer who shot Robinson, veteran Officer Matt Kenny, is currently on administrative leave while the Wisconsin Department of Justice continues its investigation, which is expected be be about 80 percent done in two weeks.