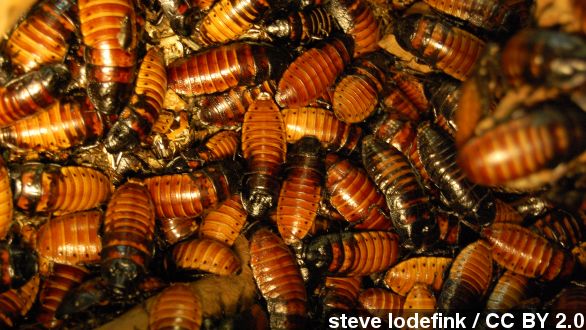 Cockroaches get a bad wrap as far as crawly critters go, but they could save your life during a disaster.

Researchers at North Carolina State University have developed tiny microphones that can be attached to the back of cockroaches to pick up particular sounds, like someone's voice, to help locate disaster victims.

The roaches tested were equipped with two different kinds of what researchers are calling electronic backpacks. (Video via North Carolina State University)

The first kind picks up high-pitched sounds and sends an alert to first responders. (Video via CNN)

The second kind of backpack contains three directional microphones that guide the roach toward the sound. (Video via North Carolina State University)

The researchers also developed technology designed to create an invisible fence around the roaches, confining them to one disaster area. (Video via CBS)

So, why are cockroaches the ideal insects for these kinds of search-and-rescue missions?

Edgar Lobaton, one of the project developers, told IEEE Spectrum cockroaches have been naturally designed to withstand some of nature's most extreme situations.

But it's that kind of wiring that's raised ethical concerns over equipping living organisms with machines, creating what the scientific community calls a biobot.

Despite these ethical concerns, a contributor for Forbes writes the relatively simple anatomy of insects, "...provide the gold standard in terms of aerodynamics, sustainability, energy efficiency and biochemical sensor capabilities."

Previous studies show biobots can also be used to map out disaster sites.