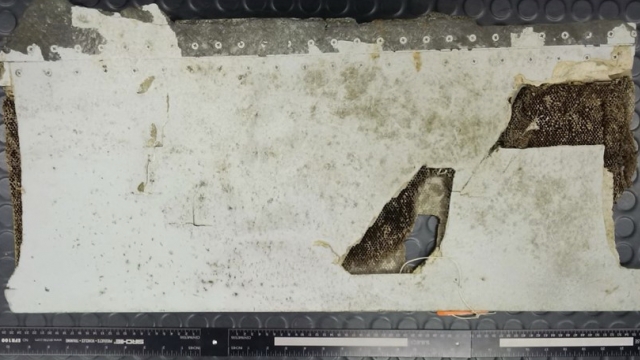 By Briana Koeneman
October 7, 2016
After close examination, experts used a part number on the flap to link it to the Boeing 777 that went missing in March 2014.
SHOW TRANSCRIPT

Officials have confirmed this piece of debris found on the Indian Ocean island of Mauritius is from Malaysia Airlines Flight 370.

According to the Australian Transport Safety Bureau, the debris — a section of the left wing flap — was initially found back in May.

And after close examination, experts were able to use a part number found on the flap to link it to the downed Boeing 777.

Several other pieces of debris believed to be from the missing plane have been found not too far from Mauritius. But so far, officials have only formally identified two other parts from MH370.

SEE MORE: A Fire May Have Broken Out Before Flight MH370 Crashed

The first confirmed piece from the jet was found on Reunion Island in July 2015. And part of the right wing flap was discovered on the Tanzanian island of Pemba in September.

This latest find in the search for the plane is encouraging. But Australia's transport minister told reporters, "It does not, however, provide information that can be used to determine a specific location of the aircraft."

Malaysia Airlines Flight 370 disappeared more than two years ago with 239 people on board. The main wreckage and the flight recorders have yet to be recovered.

An investigation into the missing plane is ongoing. An underwater sonar search over the area where experts say the aircraft might have crashed is almost complete.