Will Your State Get Hit By A Sharknado? Someone Investigated 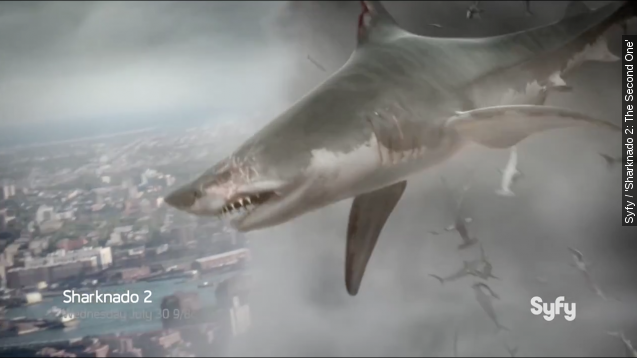 SMS
Will Your State Get Hit By A Sharknado? Someone Investigated
By Jake Godin
By Jake Godin
July 24, 2015
If you combine stats on shark attacks and tornadoes, does it really give you the chances of a sharknado? Probably not, but Estately did it anyway.
SHOW TRANSCRIPT

By now you’ve probably seen at least one of the Syfy Sharknado films....

But really...c’mon. A sharknado? Those things can’t actually happen. Right?

Well, the folks at Estately have some bad news. Using what we’re not really comfortable calling

“science,” they scried a list of the top 10 states where a Sharknado could probably-definitely happen.

Essentially, the real-estate search site looked at which states have the most tornadoes per year. (Video via Warner Bros. / 'Twister')

And which states have had the highest number of unprovoked shark attacks. (Video via Universal Pictures / 'Jaws')

And combined the two to figure out which state was going to be most likely to experience a Sharknado.

Coming in at No. 1? Florida, unsurprisingly. If you have any shark-tornado-type phobias, you may want to find a new place to live.

In fact, most of the South was at risk, according to Estately. Texas, Louisiana, Alabama, Georgia, North and South Carolina and Mississippi were all in the top ten states most likely to experience a fearsome sharknado.

“Sharknadoes have now been reported all up and down the east coast,” a news reporter says in 'Sharknado 3: Oh Hell No.'

California to the west and New York to the north rounded out the list at nine and ten, respectively.

Not be left out, Estately included which states were least likely to experience a Sharknado.

And with zero average tornados per year and zero unprovoked shark attacks, Alaska came in as the safest place to live if you’re afraid of flying sharks.