The UK's Chaotic Elections End In A Conservative Victory 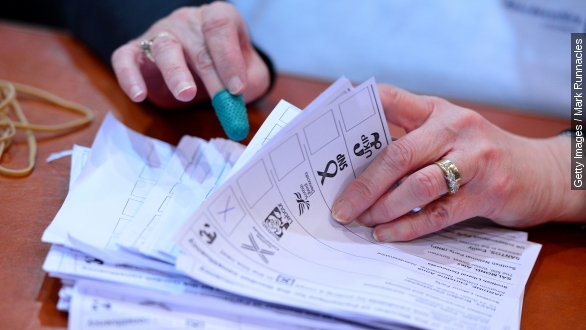 The results are in, and, to the surprise of many, the U.K.'s general election has produced a clear winner — David Cameron.

Of the country's two main parties, Cameron's incumbent Conservatives came out on top of the Labour party. By Friday morning it was clear they had received enough of the vote to secure an outright majority in Parliament, which means they won't need to form a coalition government.

But the key question from this election might not be what kind of government runs the U.K. for the next five years, but whether voters are getting their fair say. This election cycle has seen plenty of criticism of the way the country counts votes and appoints members of Parliament.

Lord Gus O'Donnell told the BBC, "I think people will think at the end of this, people will think 'Are there better voting systems? ... Is this relationship between votes and seats so out of kilter that we should think again?'"

The U.K. currently votes according to a system known as "first-past-the-post." It's basically a winner-take-all model where the candidate who grabs the majority of votes gets elected.

That model works well in two-party systems, where strong majority wins lead to governments with a solid mandate. But the U.K.'s two-party politics have increasingly seen minority parties arriving on the scene, sometimes throwing a wrench in the election process.

And those minority parties might not be getting their fair share of representation in the new Parliament. Take the far-right UKIP, which won the support of about 13 percent of the electorate but only managed to secure what appears to be a single seat since their supporters were spread out across the U.K.

Compare that to the Scottish National Party, which only ran candidates in Scotland. The SNP won only a fraction of the U.K.-wide vote, but took over Scotland in a landslide: this makes it the third-largest party in Parliament, despite not getting one vote outside of Scotland.

Add in an epidemic of tactical voting, which sees voters casting their ballots solely to block one party from getting the majority, and the new parliament risks not matching up to what British voters actually want during the elections. So, what would change that?

One proposed solution is "alternative voting," which was defeated in a 2011 referendum. This method allows voters to rank the candidates in order of preference; votes for less popular candidates then get folded into the majority until a clear winner emerges.

The system still relies on majority rule, so it wouldn't shake up the current electoral map too much. But at least voters could support minority parties without splitting the vote of larger parties.

The U.K. could also adopt a form of proportional representation, which is used by many other parliamentary democracies in Europe and elsewhere. This system requires each district to have multiple seats, which are doled out to reflect the percentage of electoral support each candidate receives.

Proportional representation would probably result in more coalitions and minority governments. But if U.K. voters don't like how this next government turns out, they might look to electoral reform for a solution in future elections.

CORRECTION: A previous version of this video said no parties received enough votes to secure a majority in Parliament. The video has been updated.