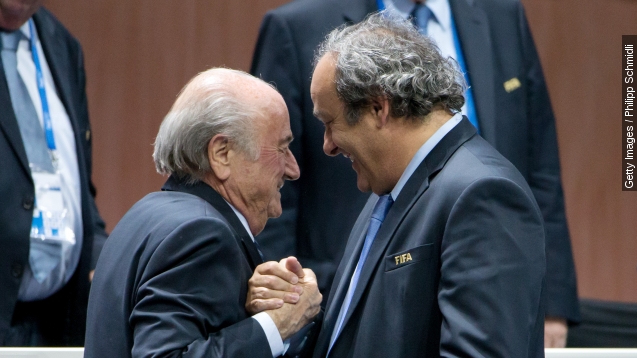 But whether Blatter's likely successor, Michel Platini, will help that image problem remains to be seen. (Video via BBC)

Platini is the president of UEFA, the FIFA confederation that governs European soccer.

And he's faced his own allegations of corruption related to the 2022 World Cup in Qatar. (Video via Al Jazeera)

"For me, I vote for Qatar because I think it was nice to go in another part of the world, with people who never received the World Cup," Platini told Al Jazeera.

Even if the accusations are false, being tied to the same sinking ship — the Qatar World Cup — that took down Blatter isn't great for the image.

And then there's the issue of financial fair play, or FFP.

That's the system whereby teams in the pan-European UEFA Champions League are supposed to stick to spending limits (tied to how much they earn), and if they exceed them, they're supposed to be sanctioned.

But some critics said UEFA isn't strict enough in its enforcement, and others say FFP is just plain illegal. (Video via CCTV)

Finally, there's the small fact that Platini isn't an outsider.

Despite being a legend in the soccer world, and one of the greatest players of all time, he's also been close to Blatter for a long time, and he's been in the upper echelons of UEFA for more than a decade.

If FIFA really wants to revitalize its image, choosing a longtime insider probably isn't the best way to do it.