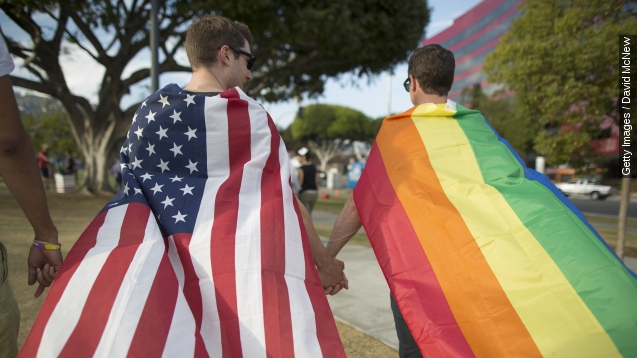 SMS
Will Same-Sex Marriage Lower Divorce Rates? It's Complicated
By Karen Rodriguez
By Karen Rodriguez
July 2, 2015
Now that same-sex marriage is legal in all 50 states, how will this affect the national divorce rate? Well, it's complicated.
SHOW TRANSCRIPT

But where there is marriage, there is also divorce.

A 2014 UCLA Williams Institute report looked at two states' administrative data: New Hampshire and Vermont. The report showed "same-sex couples end their marriages at a rate of 1.1 percent annually, on average," compared to a 2 percent annual divorce rate among different-sex couples in those two states. It’s only slightly lower.

So, now that same-sex marriage is legal in all 50 states, how will this affect the national divorce rate? Well, it's complicated.

Hurdles for couples to marry have cropped up all over the country.

And those could stall what New York Magazine calls "the start of a divorce boom" due to more same-sex marriages.

But, even when those legal hurdles are cleared, it may take states a while to gather statistics on same-sex divorce, if at all.

Take Massachusetts, a state that has allowed same-sex marriage since 2004, and up to 2013 has seen 25,785 couples marry. But Massachusetts as a state does not track how many of those couples have divorced.

Anne Roach, a spokesperson for Massachusetts’s health department told the Wall Street Journal the lack of data is due to the fact "there is no gender field on the divorce certificates."

But those statistics were gathered before the June ruling. Now that same-sex marriage is legal in the whole country, the pressure has increased for states and the federal government to accommodate for marriages and divorce.

And other parts of the world are also lagging. While some European countries have data on "divorces and dissolutions of same-sex marriages and partnerships," the numbers are so small that statisticians warn they aren't reliable.

"It's surprisingly hard to study the divorce rate. It's really based on divorces and marriages that happened many many years ago, and that's a different generation of people that doesn't give you a great sense of if you're getting married today, what's my risk of divorce," said Dr. Galena Rhoades told The Huffington Post.

It looks like only time will tell for same-sex couples, but one theory predicts divorce rates may increase with time.

While we do see a rush of same-sex marriages, the reasons to marry vary. On one hand, you have couples that have already been together for years — even decades — who are less likely to divorce.

And on the other, you see young couples jumping into marriage because of the "excitement about gaining the right to wed."

The theory suggests these factors could affect the length of a couple's marriage, thereby increasing divorce rates in the future.