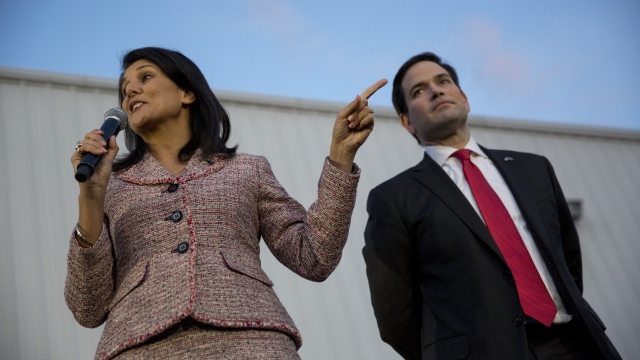 It's been a roller-coaster week for GOP presidential candidate Sen. Marco Rubio.

First, he was dubbed the winner of the debate in South Carolina. Then he received some negative press for using video of Canada in a campaign ad. And Wednesday, Rubio got a shiny new endorsement from the governor of South Carolina.

"But I wanted somebody humble enough, that remembers you work for all the people. ... If we elect Marco Rubio, every day will be a great day in America," Gov. Nikki Haley said.

Rubio welcomed the endorsement, but will it help him win the South Carolina primary on Saturday? Hard to say.

Donald Trump has dominated the polls in South Carolina since July. And on average, the latest numbers show Rubio about 17 points behind Trump and neck and neck with Sen. Ted Cruz.

But Haley is the state's most popular Republican politician, so her endorsement can't hurt. However, in the 2012 presidential race, she endorsed Mitt Romney who went on to win the Republican nomination but lost the state of South Carolina to Newt Gingrich.

Rubio's campaign could use some momentum after coming in fifth place in New Hampshire. We'll have to wait until Saturday to find out if he gets what he needs in South Carolina.