Will Paris Be Tipping Point For UK Airstrikes In Syria? 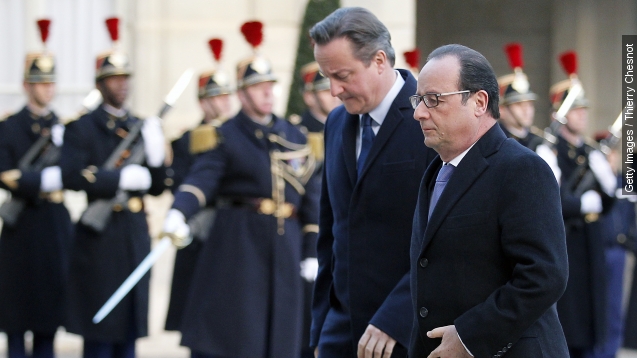 SMS
Will Paris Be Tipping Point For UK Airstrikes In Syria?
By Kate Grumke
By Kate Grumke
November 23, 2015
U.K. Prime Minister David Cameron announced he would call for airstrikes in Syria after visiting with French President Francois Hollande.
SHOW TRANSCRIPT

After months of trying to get political support for airstrikes in Syria, U.K. Prime Minister David Cameron is making another push for action against ISIS.

Cameron announced Sunday night he is making the case to Parliament that the U.K. needs to help its allies go after the terror group's headquarters in Raqqa, Syria.

The U.K. has been hitting ISIS targets in Iraq for over a year, but Cameron hasn't been able to convince members of Parliament that strikes in Syria are necessary.

Paris could be the tipping point. The attacks that killed 130 and were claimed by ISIS could give Cameron a powerful argument for action in the interest of defense.

Cameron has had trouble convincing Parliament to step in before. In 2013, after reports of chemical weapons attacks against Syrian civilians by Bashar al-Assad's government, Cameron tried to get Parliament to approve military action in Syria. The motion fell short.

This time around, the United Nations Security Council supports Cameron's request. It passed a resolution Friday calling on member states to come together with military action against ISIS.