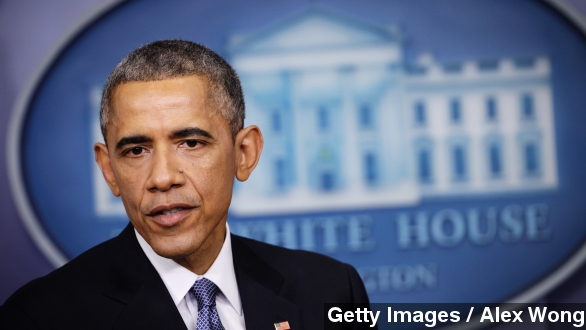 SMS
Will Obama Regret Afghanistan Troop Withdrawal?
By Cliff Judy
By Cliff Judy
December 27, 2014
In declaring an end to the combat mission in Afghanistan, Obama said the country is "not going to be a source of terrorist attacks again."
SHOW TRANSCRIPT

CORRECTION: A previous version of this video incorrectly attributed the number of civilian casualties in Afghanistan to NBC. The video has been updated.

President Obama's legacy will certainly be an interesting and historic one, even by commander-in-chief standards.

But as he visited troops in Hawaii Christmas Day and proclaimed an end to the war in Afghanistan, some are already debating whether his comments will prove regrettable. (Video via CNN)

"We've been at war now for almost 13 years — over 13 years," said Obama on Fox News. "Afghanistan has a chance to rebuild its own country. We are safer. It's not going to be a source of terrorist attacks again."

But as the U.S. gradually withdraws troops to about 10,000 by the end of 2014, half that a year later, and then a normal embassy presence by the end of 2016, stability is still something Afghanistan's struggling to grasp.

This was the deadliest year for Afghans since the United Nations started tracking casualties in 2009. UN numbers show the country is on pace for 10,000 civilian deaths or injuries by the end of 2014. (Video via ODN)

The Taliban is generally considered to be active in most of the country and shows no signs of slowing its attacks, especially with less resistance to deal with once fewer U.S. troops are around. (Video via Al Jazeera)

If that sounds familiar, it should. This summer, ISIS took advantage of virtually the same situation in Iraq and a distracted regime trying to stomp out a rebellion in Syria. (Video via Journeyman Pictures)

The U.S.'s delayed response in fighting ISIS with air strikes has been criticized for allowing the militants to entrench themselves and for the thousands of murders the group has very publicly committed.

An anonymous Afghan battalion commander told The Washington Post in May, "Leaving in 2016 is not responsible."

Even India's prime minister Narendra Modi urged the U.S. not to pull troops in a September speech at the Council on Foreign Relations.

Modi said he requested, "please do not repeat the mistake that you did in Iraq, because after such a rapid withdrawal in Iraq, what happened there…the withdrawal process in Afghanistan should be very slow, let it stand on its own, and only then it can stop from Taliban emerging its head there."

As a writer for The Atlantic put it, "What these doomsayers understand is that Afghanistan is just as politically and militarily dysfunctional as Iraq, only poorer."

"Afghanistan itself as we look into the future is going to be messy," Steve Clemons of The Atlantic told MSNBC. "We see a resurgent Taliban in areas where the United States has left — parts of Afghanistan. And we see a rise of warlordism, which we rarely talk about."

To be fair, many analysts have pointed out Obama's comments were talking about terrorist attacks on the U.S. and our country being safely removed from the situation in Afghanistan.

For now, that seems accurate. In a much-debated 2011 interview with Newsweek, Vice President Joe Biden said the Taliban was not a threat to the U.S. and we could deal with the larger Al-Qaeda threat with air strikes. (Video via Euronews)