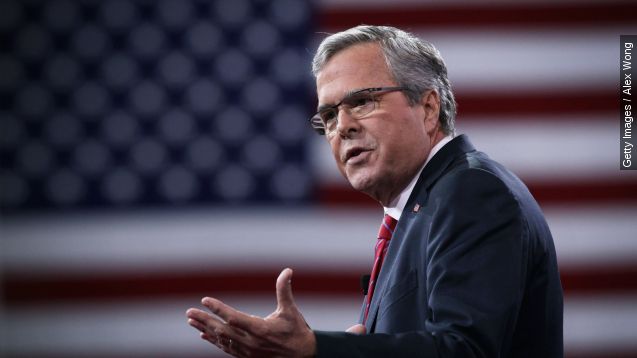 By Elizabeth Hagedorn
June 8, 2015
Soon-to-be presidential candidate Jeb Bush will make his case on the world stage during a six-day, three-country tour through Europe.
SHOW TRANSCRIPT

Jeb Bush is gearing up for his long-awaited campaign announcement. But first, he has a swing through Europe planned with stops in Germany, Poland and Estonia. (Video via Right to Rise PAC)

He's not the first potential candidate to make a Eurotrip this year.

"Governor, what do you hope to accomplish on this trip?" an MSNBC reporter asked Chris Christie.

And with any luck, he'll fare better.

For candidates, especially governors with little foreign policy experience, visits abroad offer a chance to demonstrate their credentials on the world stage.

Especially important in an election where the Democratic front-runner is a former secretary of state who logged nearly 1 million miles on the job. (Video via U.S. Department of State)

But resumes aren't everything. Republicans are linking Hillary Clinton to some of President Obama's less popular foreign policy decisions, including outreach to Iran and Cuba. (Video via The White House)

"We simply cannot afford to elect as our next president one of the leading agents of this administration's foreign policy," Marco Rubio said at a Council on Foreign Relations event.

Amid the rise of ISIS, touting a more muscular foreign policy could be a winning strategy — at least in the Republican field.

"I want to be president to defeat the enemies that are trying to kill us," Sen. Lindsey Graham said in his announcement speech.

It's not ISIS but Vladimir Putin that's expected to be the focus of Bush's European tour. The Republican candidate has labeled the Obama administration's policy to not arm Ukraine as "feckless."