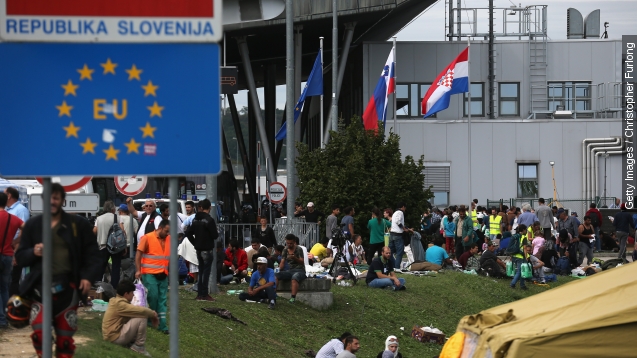 In the midst of a refugee crisis, Europe is struggling over its commitment to essentially open borders. (Video via United Nations High Commissioner for Refugees)

Twenty-six countries in Europe are part of the Schengen Area, which allows travelers to pass between them without a passport or other border controls.

But now, polls show people in influential European countries, like Germany and France, want to end that.

Leaders like France's Prime Minister Manuel Valls have said Europe can't take any more refugees, and others have called for more border security. But not everyone's on board. (Video via Public Senat)

"If the spirit of Schengen leaves our countries, and our hearts, we lose more than just Schengen," said European Commission President Jean-Claude Juncker.

European Commission President Jean Claude Juncker is one person making the argument that Schengen is a part of the modern European identity. Columnist Jon Worth is another.

He argues in The Guardian, "The solution is not to abandon Schengen, but to strengthen its systems."

Both say the system itself isn't broken; it just needs to be enforced. (Video via EurActiv)

In theory, refugees are supposed to apply for asylum in the country where they first arrived. But Greece and Italy have been so overwhelmed, that hasn't happened.

"Despite the winter weather, more than ever are risking their lives to make that sea crossing to Greece, up to 10,000 people a day," an ITV anchor read.

So Europe could strengthen Schengen, or it could do away with it altogether, but either way, it seems unlikely the Continent's border security will emerge from the crisis unchanged.