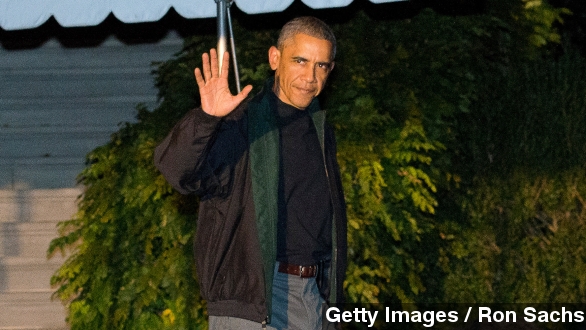 As President Obama kicks off his trip to Asia with a visit to China, there are a few things to look for — but one of the biggest is how the November elections have affected the president's image abroad.

Some analysts saw the gains by Republicans last week as a referendum on the president, and heading into his last two years in office, the election results could affect his influence abroad.

The president will be attending the Asia-Pacific Economic Cooperation forum this week, a meeting that looks to promote free trade and cooperation between the Pacific Rim countries. (Video via NBC)

In an article creatively titled, "Lame duck swims to Asia" a writer for Politico argues, "while Obama’s political capital may be somewhat depleted, his economic capital is actually stronger than it has ever been," which will be important seeing as this trip is mainly trade-focused.

But it's the president's meeting with his Chinese counterpart Xi Jinping that's attracting a lot of attention.

HWANG SUNG-HEE, ARIRANG: "The White House says Obama will hold bi-lateral talks with his Chinese counterpart next Wednesday in Beijing ... President Xi wants a new model of great power relations in which Beijing will have a bigger say in the region."

Restructuring balance of power in the region between China and the U.S. will be one of the main goals, and Secretary of State John Kerry didn't exactly downplay the importance of that balance at an event last week.

JOHN KERRY, U.S. DEPARTMENT OF STATE: "A stronger relationship between our two nations will benefit not just the United States and China, not just the Asia Pacific, but the world."

The president will not be arriving to the warmest possible greeting, as an op-ed in state-run newspaper Global Times argued, "With China's rise, we gradually have the ability to have a clear understanding of the US. The country is too lazy to reform. US society selected Obama, but there is no great American president in this era."

Still, Global Times has a reputation for being boisterously pro-China, and it doesn't necessarily represent public opinion in the country.

A panelist for Foreign Policy argues the increasing rivalry between the two countries is a symptom of the president's refusal to adjust the balance of power.

"If sticking to his present aim of preserving the status quo will only lead to escalating rivalry with an increasingly formidable adversary, some change of approach might be worth considering."

The president's trip will also take him to Burma and Australia.