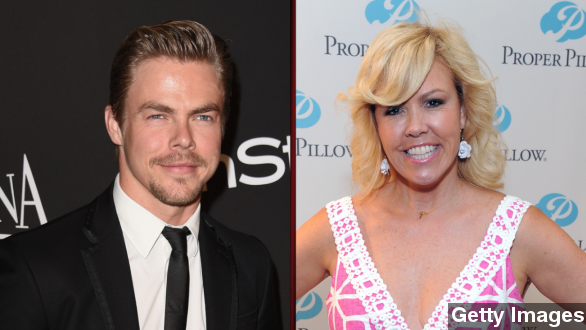 SMS
Will Cast Shake-Ups Hurt TV's Biggest Dance Contests?
By Katherine Biek
By Katherine Biek
January 13, 2015
Derek Hough is leaving "Dancing with the Stars," and Mary Murphy won't return to "So You Think You Can Dance." How will this affect the shows?
SHOW TRANSCRIPT

Major shake-ups are heading for the dance floors of the two largest reality dance-competition shows on television.

This news came after Hough cryptically posted a photo of the Brooklyn Bridge with the caption "A new chapter is coming" on his Instagram account Monday.

Hough isn't the only familiar face who will be gone this spring.

Dancer Cheryl Burke previously announced she was leaving the show after 18 seasons. Back in December, Entertainment Tonight reported Burke was attached to a new NBC competition series.

Although Burke has been on the show longer, Hough's departure is a bigger game-changer for the show.

Burke won her first two seasons of the show but had since fallen flat with some of her contestants. Last season she placed seventh with her celebrity partner Antonio Sabato Jr. (Video via ABC / "Dancing with the Stars")

On the other hand, Hough has won five out of his 14 seasons. He most recently won the 17th season with "Glee" star Amber Riley.

And Hough is always lucky when it comes to celebrity partners. He's often paired with already strong dancers like Nicole Scherzinger or celebs who are inspiring like double amputee Amy Purdy.

The lowest he's ever placed is sixth with actress Shannon Elizabeth back in his second season.

"Dancing with the Stars" isn't the only dance-competition show losing a key player.

"So You Think You Can Dance" judge Mary Murphy is also leaving her post for the show's 12th season.

Originally a choreographer on the show, Murphy has been a permanent judge ever since its third season. She did take a break from the show in 2010 because of a cancer scare.

Throughout all of that, Murphy is known for one very important thing she brings to the show: her screaming. (Video via Fox / "So You Think You Can Dance")

"You are on the hot tamale train!"

Murphy's exit isn't too surprising, though. Back in December, outlets reported the show's producers were looking to make Paula Abdul a permanent judge.

And now it seems leaving wasn't her choice. A spokesperson for Murphy told TVLine the judge wasn't given the option to return for another season.

Still, it doesn't look like these casting shake-ups will hurt the ratings of either show.

"Dancing with the Stars" can do no wrong when it comes to ratings, and around 15.8 million people tuned in to watch its 19th season finale back in November, according to TV by the Numbers.

In comparison, "So You Think You Can Dance" doesn't have stellar ratings: The Wrap reported its last season finale drew 5.7 million viewers. But people don't tune in for Murphy — they tune in for the competition.

But since it airs during the summer when TV ratings usually fall, Fox would really need to come up with a better reality show concept if it wanted to replace the show, which is why its upcoming season will feature a new format with stage and street dancers competing against one another.

Sounds an awful lot like the movie "Step Up," which did end up spawning four sequels, so maybe Fox is onto something.