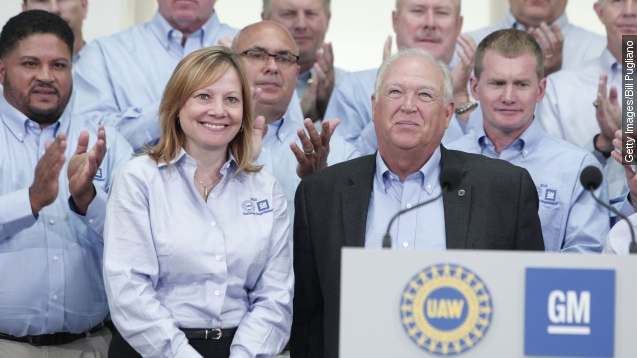 SMS
Will Big 3 Automakers Flinch In Union Negotiations?
By Matt Patston
By Matt Patston
July 14, 2015
Union workers are asking for pay raises in bargaining negotiations. Despite the potential conflict, neither side appears to be preparing for a fight.
SHOW TRANSCRIPT

If the U.S. auto industry died during the recession, it makes for a pretty good-looking zombie now.

Detroit's big three — General Motors, Ford and Fiat Chrysler — have recovered from the lean years of bailouts and bankruptcies, and their employees want a share of the love.

GM is set to begin negotiations with the United Auto Workers union, and Ford and Chrysler Fiat are expected to follow shortly after. The union last negotiated in 2011 when the industry was emerging from the recession.

Now that American automakers have recovered, the UAW is asking for pay increases and a smaller wage gap between new and old workers.

Although it seems like the two sides have some tough bargaining to do, GM and union leaders are optimistic.

The Detroit Free Press quoted GM President Mary Barra as saying: "We recognize that the competition is intense, and it will only get more intense, that we will face many challenges. But I believe we can deliver an agreement that benefits the business and our employees."

Neither side appears to be gearing up for a fight, and the big three have tried to smooth relations with the union since the recession — Fiat Chrysler and GM through profit-sharing and Ford through pay raises.

Chrysler opens negotiations with the UAW on Wednesday, and Ford is scheduled to follow next week.