Will A Woman Take Andrew Jackson's Place On The $20 Bill? 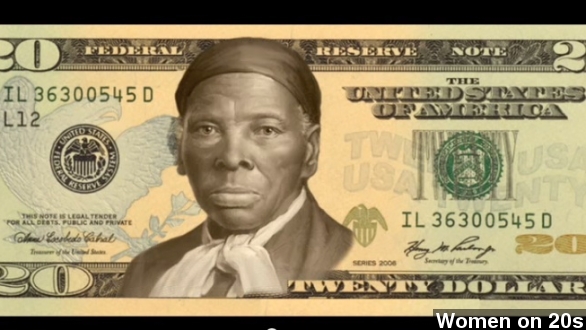 Who chooses what faces go on American money? It’s probably something you’ve never really thought about.

Of course it makes sense to have George Washington, the nation’s first president, on the one dollar bill.

Then you’ve got Abraham Lincoln on the five — after all, he did end the bloody Civil War and sign the emancipation proclamation, which ended slavery.

But why is Andrew Jackson on the twenty?

According to Biography, "Well, no one really knows."

So maybe it's time to switch it up? At least that’s the aim of the organization Women on 20s.

The Washington Post talked to the organization’s executive director who said Andrew Jackson "would be rolling in his grave to know that every day the ATM spits out bills with his face on it." And he probably would be.

"It's pretty ironic to showcase a president who hated paper, as he trusted on the hard stuff, gold in silver," reports Biography.

But the group's goal isn't just to get Jackson's face off the bill. On its site W20 writes, "We believe this simple, symbolic and long-overdue change could be an important stepping stone for other initiatives promoting gender equality."

Now, Sacagawea, a woman, is on the dollar coin, but who actually uses those? Anyway the point is, no woman has ever been featured on paper money.

The group has provided a list of 15 possible candidates, some of which include Susan B. Anthony, Harriet Tubman, Eleanor Roosevelt, and Rosa Parks. The idea has at least one legitimate backer.

"A young girl wrote to ask 'why aren't there any women on our currency.' And then she gave me like a long list of possible women to put on our dollar bills and quarters and stuff, which I thought was a pretty good idea," President Obama said.

But why choose Andrew Jackson, the man of the common folk, to kick to the curb, other than his supposed hatred for paper money? Well, for one, his extremely controversial decision to pass the Indian Removal Act of 1830.

"The result was that they were rounded up at gunpoint and forced to move. On the Cherokee's forced march about one out of every four died en route." reports History Channel.

Jackson was also a supporter of slavery — something many of the women who could potentially take his place on the 20 fought to end.

And while there seems to be a decent amount of support to replace the portrait on the $20 bill...

Not everyone is happy with the list of candidates — at least one of whom is a bit controversial. Margaret Sanger founded Planned Parenthood, which provides family planning services, which sometimes included abortions.

We will note, however, there's nothing to say Andrew Jackson will actually get the boot.

But in 2013 a similar campaign was successful in Britain, putting English novelist Jane Austen on the 10-pound note. "I think it's important to have both sexes represented," said one citizen.

This video includes images from the U.S. Treasury Department and Henry P. Moore.