Will A 'Bombing Freeze' Work In Aleppo? 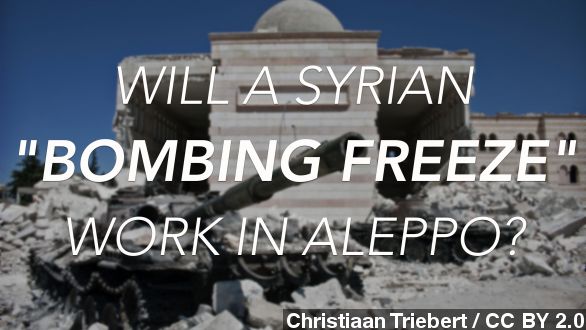 SMS
Will A 'Bombing Freeze' Work In Aleppo?
By Jake Godin
By Jake Godin
February 18, 2015
The U.N. special envoy for Syria announced on Tuesday the Syrian government would agree to a bombing truce in the city of Aleppo. But will it work?
SHOW TRANSCRIPT

Will a Syrian "bombing freeze" work in Aleppo? (Video via Syrian Civil Defense)

On Tuesday, the United Nations special envoy for Syria announced the Syrian government had agreed to a bombing freeze in Aleppo for six weeks.

"The government of Syria has indicated to me its willingness to halt all aerial bombing … and artillery shelling for a period of six weeks," Staffan de Mistura said during a press conference.

That includes the use of devastating barrel bombs, an imprecise, makeshift explosive dropped from helicopters into dense neighborhoods. Assad's regime denies using them, despite a lot of evidence to the contrary.

"I know about our army, they use bullets, missiles and bombs. I haven't heard of army using barrels or maybe cooking pots," Assad told the BBC in a February interview.

De Mistura will also hold discussions with opposition groups in an attempt to get them to halt rocket or mortar attacks against regime-controlled areas of the city as well. (Video via Free Syrian Army 16th Brigade)

But there's no guarantee all parties will agree to De Mistura's tentative truce.

The BBC reports members of the Syrian Revolutionary Command Council, a coalition of the more secular rebel forces, accused De Mistura of being biased after he met with President Assad.

And according to The Guardian, another major rebel faction and Al-Qaeda affiliate, Jabhat al-Nusra, declared its own opposition to the De Mistura deal, also criticizing the envoy for meeting with Assad.

The days leading up to De Mistura's announcement also saw many casualties on both sides as regime forces attempted to surround Aleppo in a military offensive. (Video via Nour Media Center)

According to U.K.-based monitoring group Syrian Observatory for Human Rights, 70 pro-government fighters and more than 66 rebel fighters died as the regime attempted to retake parts of the city. (Video via Halab News Network)

Still, an analyst tells Bloomberg the high death toll might increase the appeal of a truce, even if it's temporary. Especially since it doesn't require rebels to surrender.