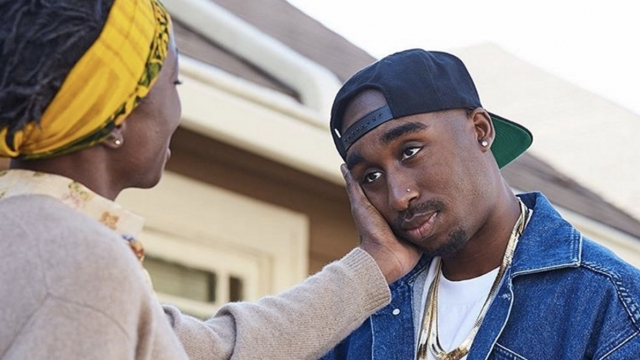 SMS
Will 2Pac's Biopic Match NWA's Historic Box Office Run?
By Calvin Stovall
By Calvin Stovall
June 17, 2016
"All Eyez on Me" will resurrect 2Pac on the silver screen — but can it earn the title of best-selling biopic of all time?
SHOW TRANSCRIPT

2Pac is coming back. No, not from the grave, sadly. But the legendary rapper-actor will return to theaters in November.

A trailer for the biopic "All Eyez on Me" hit the internet Thursday, just in time for the late icon's 45th birthday.

The minute-long sneak peek doesn't reveal which parts of Pac's life will be covered, but it looks like his mother, Afeni Shakur Davis — who executive-produced the film before she died in May — will play a big role.

"This ain't just about you. Like all black men, you have a bullseye on your back. ... To thine own self, be true. Now let me see your spirit," Danai Gurira says as Afeni Shakur Davis.

Tupac's lifelong battles against racism and police brutality appear to be major themes, and that could be a good sign for the film's box office potential.

Similar topics in last year's "Straight Outta Compton" also struck a chord with audiences. The film raked in over $200 million worldwide and became the highest-grossing music biopic of all time.

The trailer shows rookie actor Demetrius Shipp Jr. looking and sounding the part. Shipp Jr. told XXL magazine his last acting role was in a sixth-grade play, but he seems up to the challenge of playing the enigmatic star who was slain on the Las Vegas strip in 1996 at age 25.

Shipp Jr. is no stranger to Pac's legacy. His father produced the rapper's 1996 single "Toss It Up," and Shipp told TMZ that people have been noting his resemblance to Pac since he was a teen.

"I got called Pac, like, all through high school, at jobs. I worked at Target; they would call me Pac. ... It ain't nothing new," Shipp Jr. said.

Given 2Pac's cult following and the hype that's already surrounding the trailer, don't be surprised if "All Eyez on Me" makes Shipp Jr. an overnight star while giving NWA's box office hit a run for its money.

This video includes clips from TMZ, Open Road Films and Death Row Records and images from Instagram and Getty Images.