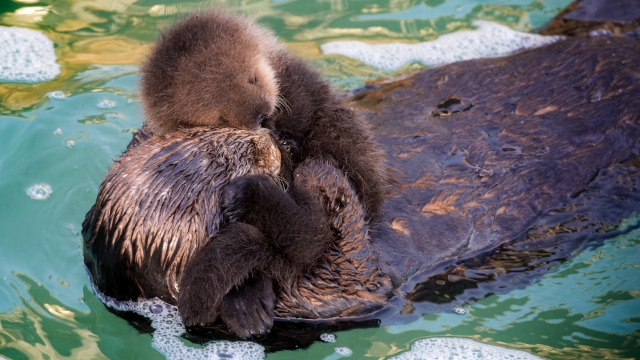 Another baby sea otter is making headlines, and it's thanks again to a caught-on-camera moment.

The Monterey Bay Aquarium maintains a Great Tide Pool that allows wild animals to come and go as they please. On Saturday, one otter mama decided that pool was the best place for her to give birth.

"Ahh there it is. Look at that everybody, there's the pup coming out," said an aquarium worker.

Mom and newborn pup stuck around the pool for a couple days before heading back out to the open ocean.

Sea otters used to be nearly extinct, but the number of Southern sea otters reached a high in 2015. Experts think a spike in sea urchins, a prey that sea otters love, might explain some of the increase.

The Great Tide Pool is an impressive feature at the Monterey Bay Aquarium, giving wild animals a break from the churning ocean waters.

The aquarium says this was the second time since December that a mom-to-be used their tide pool as a birthing center.

The video includes images from the Monterey Bay Aquarium and Jinx McCombs / CC BY ND 2.0.