Wild-Caught Salmon Isn't So Wild After All 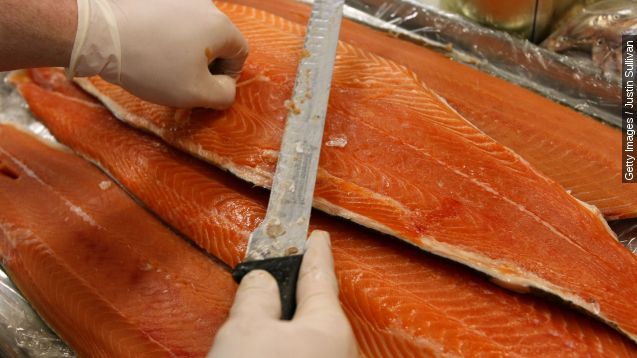 SMS
Wild-Caught Salmon Isn't So Wild After All
By Katie Link
By Katie Link
October 28, 2015
A new study released by Oceana shows you may be getting duped at the fish counter and at your favorite seafood restaurant.
SHOW TRANSCRIPT

Salmon. It's America's favorite fish, and it might be America's biggest rip off.

A study by conservation group Oceana found that 43 percent of salmon samples collected from restaurants and grocery stores during the winter months of 2013 and 2014 were mislabeled. Almost 70 percent of the mislabeling was farmed Atlantic salmon being sold as "wild-caught."

The group collected samples from several states. The fish got the "fraud" card if it was labeled as "wild," "Alaskan" or "Pacific" but was really farmed Atlantic salmon, or if the fish was labeled something specific like "Chinook" but was actually a different species.

No surprise, the fancy fish with the impressive adjectives cost more money. Especially at restaurants and especially in the winter.

The study found restaurants sold diners a more expensive, mislabeled salmon dish 67 percent of the time during the salmon offseason. But it might not be their fault.

Nearly 70 percent of U.S. wild-caught salmon is exported. And there's really no telling what happens to the fish between the time it's exported and the time it ends up on your plate. (Video via The Boston Globe)

A director at National Oceanic and Atmospheric Administration Fisheries told NPR: "Someone can make a simple mistake. They serve salmon on the menu, run out, buy more and wouldn't necessarily even think about it. Restaurants are the most susceptible."

So what's a seafood lover to do? Oceana recommends eating salmon while it's in season — that's May through September — and asking your waiter plenty of questions.