Wickr Is The Fort Knox Of Secure-Messaging Apps 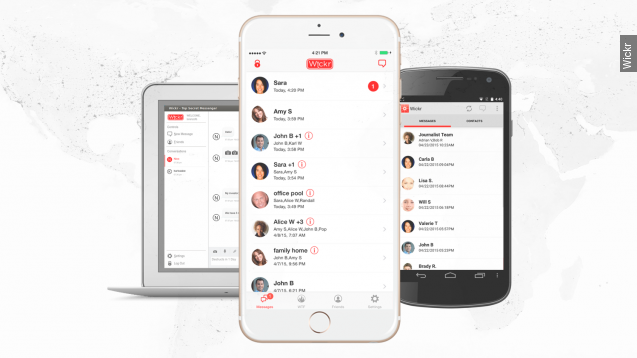 SMS
Wickr Is The Fort Knox Of Secure-Messaging Apps
By Mikah Sargent
By Mikah Sargent
August 24, 2015
Wickr is a secure-messaging app that wears its encryption like a badge of honor. Messages are encrypted locally and can be made to self destruct.
SHOW TRANSCRIPT

When you think of sending secret, self-destructing messages, you probably think of Snapchat, right? (Video via Snapchat)

But while Snapchat is really good at making casual (or embarrassing) messages to your friends disappear, you might want something a little more serious and a little more secure if you’re, say, talking behind the Prime Minister of Australia’s back.

As it turns out, when a few members of Australian Prime Minister Tony Abbott’s government needed to talk about how displeased they were with his leadership, they turned to Wickr. (Video via Liberal party of Australia)

Each message you send on Wickr is encrypted on your device, with randomly generated keys that are used only once before they’re destroyed. Same goes for messages you receive from other Wickr users.

There are many more layers of encryption and security, like ECDH521, AES 256, and TLS. That’s basically a whole bunch of letters and numbers that mean your data is locked up tight.

And Wickr has the verification of several security organizations to prove it.

The company wears its uber-encryption like a badge of honor. So much so that it offers a whopping $100,000 to anyone who can find a vulnerability. If only I knew how to hack encrypted messaging services …

Though finding a vulnerability might be hard, considering the conditions under which the app was built. Wickr’s CEO told The New York Times, “From the moment we started building Wickr, we assumed we’d be attacked by the most advanced nation-states in the world.”

And when asked whether she’d sell Wickr to Facebook — a company infamous for its, uh, love of user data — Wickr’s CEO said this: “The last thing I want to do is sell to Facebook. They're the devil. [Private] communication is a human right. Everyone in the world deserves it, and I'd never sell to a company that would complicate that.”

Yeah, we weren’t kidding when we said Wickr wears its encryption like a badge of honor. To learn more about the company and check out its apps, you can head over to the Wickr website.