Why Young People Like The Pope More Than The Church 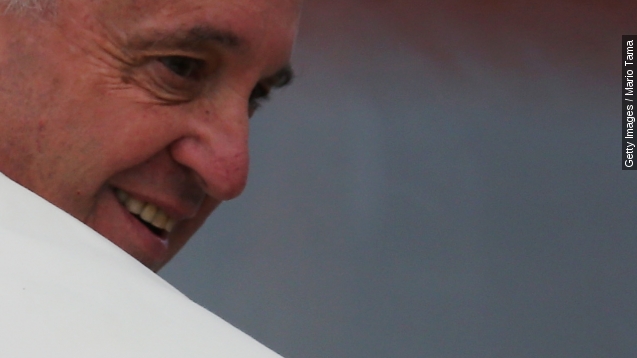 SMS
Why Young People Like The Pope More Than The Church
By Samantha Crook
By Samantha Crook
September 22, 2015
Pope Francis' charisma and unorthodox stances on social issues have helped him gain huge support among young people.
SHOW TRANSCRIPT

The pope is making his first U.S. tour, and young people might have more to get excited about than with popes past.

Pope Francis is known for engaging closely with the public and for his more liberal stances on climate change, poverty and financial reform. (Video via Rome Reports)

Some of his stances have cost him favorability with conservatives, according to a July Gallup poll. But a more recent survey from the Public Religion Research Institute shows the pope is more popular with young people than the church itself. (Video via C-SPAN)

His popularity is partly reflected in his place as the most retweeted world leader, according to Twiplomacy, an organization that studies the Twitter use of governments and international organizations.

Religious leaders and writers have been wondering why and how the charismatic pope might attract young people to the Catholic Church since early in his papacy. (Video via Salt and Light Catholic Media Foundation)

The perception that he's less punitive than other Catholic leaders could be helping. (Video via Vatican Television Center)

"Pope Francis [isn't] contradicting the church in any way. I don't think he's out to change church teaching. But what he wants to do is say, 'We've done a great job saying no, but let's do a better job of saying yes to things,'" faith writer Christopher White said during a Huffington Post interview.

The poped-out Jeep Wrangler he'll be sporting during his U.S. visit probably won't hurt his cool points either. (Video via CBS)