Why You Shouldn't Be Surprised 'American Idol' Is Ending 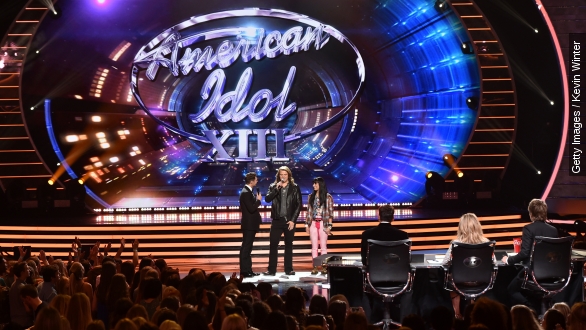 "American Idol" will dim its stage lights for the final time next spring.

But is anyone really surprised with the cancellation?

"The winner of 'American Idol' is ... Kelly Clarkson."

And the show dominated television for quite a while. Entertainment Weekly reports it was nicknamed "Fox's Death Star, a series so popular it decimated any rival that dared to air at the same time."

"Idol" hit its peak in 2006 when around 36 million viewers tuned in for the 5th season finale. Taylor Hicks ended up winning.

But since then, ratings have slumped, decreasing even more with each season.

In fact, the current season didn't even make the top 25 shows for adults 18-49 in recent ratings.

And it's most current episode, in which the top four performed, raked in just under 7 million viewers.

In comparison, almost 10 million people turned in to watch NBC's "The Voice" that same week, and almost 9 million tuned in the next night for the results show.

Another reason for the decline could be that winners of "American Idol" haven't performed spectacularly on the Billboard charts in recent years.

Billboard reported last year's winner, Caleb Johnson, debuted at only No. 24 on the Top 200 chart with his album "Testify," the lowest of any "American Idol" winner ever.

While Carrie Underwood's debut album after winning season 4 landed at No. 2 on the charts.

But overall, Fox had a failing season this past year.

The Wall Street Journal reports the network picked up nine new shows after it came in fourth place behind other major networks in both ratings and total viewers for the 2014-2015 season.

Although we are not-so-secretly hoping the original three judges will make a guest appearance at some point.