Why You Should Expect Less Green On St. Patrick's Day 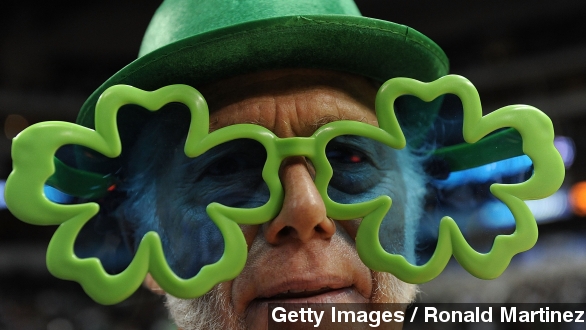 It's the holiday synonymous with green, but this year, there might be a little less of it to go around.

According to a new report, spending nationwide on St. Patrick's Day is expected to drop this year — down from $4.8 billion in 2014 to an estimated $4.6 billion in 2015. We’ll let you insert your own pot o' gold joke here.

The spending numbers come from the National Retail Federation, or NRF, which expects the number of green beer drinkers to be a tad lower than last year, as well.

By its numbers, there should be about 127 million supposedly Irish people to kiss out-and-about this St. Patrick’s Day.

That compares to about 133 million last year — making for an expected drop of about 4.7 percent. (Video via New York Daily News)

While there might be fewer people to pinch, those who go out might be partying a little harder — or at least spending a little more money.

The report also says individual spending will be slightly up this year — from $35.78 per person last year to $36.52 this year. (Video via YouTube / Lucky Buddha Beer)

So what’s behind this year’s projected drop in attendance and overall spending?

Well, the holiday does fall on a Tuesday this year — a day of the week that doesn’t exactly lend itself to wild partying.

And as an NRF spokeswoman tells the Chicago Tribune people might just be staying in, "This is just one of those holidays you don't have to celebrate, you could just go home, but for those who may have partied too hard last year, maybe they are just taking a small step back this year and reviewing their budgets."

Of course, if those numbers are a wee bit of a downer before the holiday Wallethub has a few others that might cheer you back up.

Those include the amount of dye needed to turn the Chicago River green — 45 pounds, and the market value of a pot of gold, should you find one this year — more than $1.2 million. (Videos via Chicago Sun-Times, YouTube / Animaplates)