Why You Can't Buy Some U.K.-Made Chocolate In The U.S. 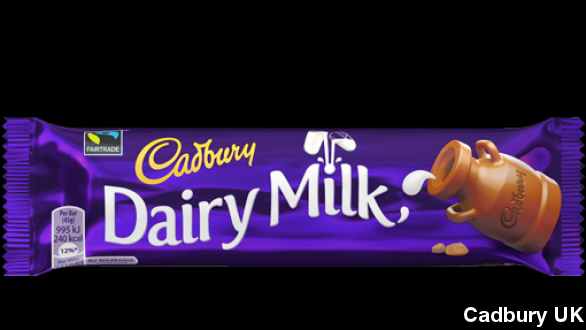 Cadbury chocolate — like this delicious-looking goodness you see here — will no longer be available for sale in the U.S.

At least not the kind made across the pond. A licensing disagreement with The Hershey Company and British importer LBB ended in a settlement that now means U.S.-based chocolate fans have to leave the country to buy some British-made chocolate.

That means no more British-made KitKat bars, too. What's the difference, you ask?

It’s all in how they're made. Take this British Cadbury Dairy Milk bar. Its first ingredient is milk.

On the other hand, the Hershey-made U.S. version lists sugar as its first ingredient.

According to The New York Times, British-made chocolate is, for the most part, higher in fat.

And in a Times reporter's opinion, also "slightly fudgier, allowing for a creamier taste and texture."

Why the confectionery conflict? That Times piece and this one from The Telegraph portray The Hershey Company as the antagonist.

Basically, Hershey has rights to make Cadbury goodies in the U.S. with its own recipes.

Here's what Hershey says: "It is important for Hershey to protect its trademark rights and to prevent consumers from being confused or misled when they see a product name or product package that is confusingly similar to a Hershey name."

But for those who do know the difference — and want to be able to buy the British version in the U.S. — there's a petition on MoveOn.org.