Why Would Shinzo Abe Visit The Yasukuni Shrine? 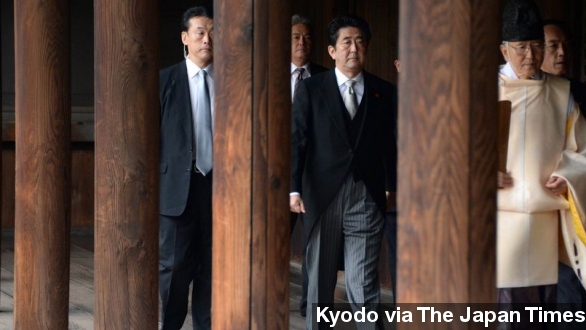 SMS
Why Would Shinzo Abe Visit The Yasukuni Shrine?

This one is definitely not going over so well.

You're watching Japanese Prime Minister Shinzo Abe visiting the Yasukuni shrine in Tokyo, which honors 2.5 million of the country's war dead. (Via Euronews)

Problem is — the Yasukuni shrine is where convicted Japanese war criminals are enshrined. (Via Wikimedia Commons / Wiiii)

War criminals like Hideki Tojo, a general in the Imperial Japanese Army who was Prime Minister of Japan during the attack on Pearl Harbor. (Via U.S. Army)

"The Korean ambassador to Japan, Lee Byung-ki, lodged a complaint with the Japanese government, saying Abe's visit is an attempt to justify Japan's wartime atrocities and that it's unacceptable." (Via Arirang)

And listen to this strong characterization of the visit from China's state-run Xinhua News:

Which called the visit "a dangerous step toward militarism":

"China and other peace-loving countries will not let the matter drop until Japan takes positive attitude to history and make efforts to repair damaged ties..."

BusinessWeek predicts backlash in China even in the business world.

But here's the thing.

You might have heard about the bitter fight China and Japan are locked in right now over a group of disputed islands in the East China Sea. It might seem unrelated, but the BBC suggests the visit — and the islands in dispute — are connected. (Via NTDTV)

"Some here believe an angry China is exactly what Mr. Abe wants and needs. ... The dispute with China over the islands can be used to say 'Look, we are threatened.'"

And there's potentially more at play here. It's long been known Abe is interested in revising Japan's constitution put in place after World War II.

As the BBC goes on to explain, "It imposes not only pacifism, but also Western notions of human rights and civil liberties."

And basically, one interpretation of the visit goes — Abe is trying to provoke China in an effort to convince Japan's pacifists that a nationalist agenda is the way to go.

Then again, of course, it's also possible all that is an overreach — that Abe simply wanted to make the visit and felt like relations with his Chinese and South Korean neighbors couldn't get any worse. (Via Australian Broadcasting Corporation)

It's probably worth mentioning Abe denies his visit honored war criminals. Instead, he said, he went to pray for the souls of the war dead. In a statement Abe pledged quote "never to wage a war again."