Why Were El Niño Predictions So Far Off Base? 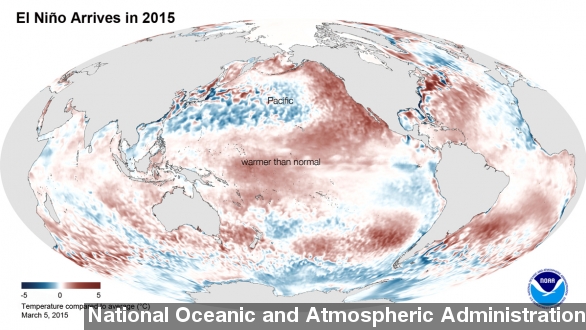 SMS
Why Were El Niño Predictions So Far Off Base?
By Steven Sparkman
By Steven Sparkman
March 5, 2015
Weather agencies say an El Niño event is officially underway, but they called for it months ago and warned it would be way stronger than it is.
SHOW TRANSCRIPT

2015 is officially an El Niño year. That's when the eastern Pacific warms up and starts messing up weather patterns around the globe.

Thursday, the National Oceanic and Atmospheric Administration declared that the long-awaited weather phenomenon has begun.

But this one is so unusual, forecasters aren't quite sure how it will impact global weather, if it will at all. That's only the latest bit of uncertainty this time around.

Ever since last spring, weather experts and the media have been declaring the event would start any day now, and it would be a big one.

Big El Niños, like the one in 1998, can result in warmer global temperatures and widespread flooding along the West Coast.

Obviously, the much-hyped 2014 El Niño didn't happen. And in a bit of bad news for drought-stricken California, the 2015 El Niño is hitting at a time of year when it's unlikely to bring much rain.

So how were the scientists off by this much?

In large part, it's because the whole El Niño cycle isn't very well understood — or at least not well enough to make surefire predictions. (Video via National Oceanic and Atmospheric Association)

"It sounds like we have a lot of record, 100 years or so. But in the scheme of things, we know El Niño oscillates and those patterns are very hard to characterize," El Niño expert Helen McGregor told ABC Australia.

And it also comes down to how you define the phenomenon. The Pacific did warm last year, but has hung out just below the benchmark for what counts as an El Niño until now. (Video via NASA)

Scientists believe the event will last through the summer, and any effects will be mild.

This video includes images from the National Oceanic and Atmospheric Administration, FEMA and Getty Images.