Why Victims Rebuild Homes In Areas Prone To Wildfires 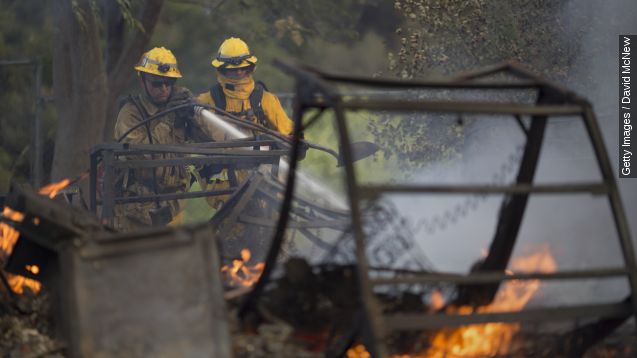 SMS
Why Victims Rebuild Homes In Areas Prone To Wildfires
By Katie Link
By Katie Link
August 17, 2015
In the heat of wildfire season, many wonder why people build and live in the danger zone. Government money might be part of the reason.
SHOW TRANSCRIPT

Every summer, wildfires rage in the West, burning acres of land and destroying homes. But once the flames are extinguished, many people rebuild — right where they were. So why do people live in areas prone to destructive wildfires?

The big reason: The government usually helps out after those fires consume property.

This wildfire season in Alaska is already the worst on record. Conditions are bad in parts of the continental U.S., too. Fires continue to rage up and down the West Coast, displacing hundreds of residents.

"This was the back patio basically of this family's house, they stayed in a hotel again last night. You can see the patio furniture is twisted and melted and mangled here," Jake Whittenberg reported for KING5-TV.

Regardless of the risk, many rebuild in the same spot. And they get help paying for it.

Under the Stafford Act, government money can start flowing to wildfire victims as soon as the president declares an emergency. An entire section of the act outlines payment for private residences.

And local communities want those affected to return and rebuild so the areas don't become health and safety hazards. Sometimes, insurance is also a factor. But the government still plays a big part.

According to NBC, a significant amount of the $1.5 billion the federal government spent fighting wildfires nationwide last year went to protecting nearly 70,000 homes. Those homes are in the wildland-urban interface — the area between occupied and unoccupied land.

Those numbers have some upset. Environmentalists are urging lawmakers to discourage people from building and buying homes in the danger zone to save taxpayer money and potentially save lives.