Why Venezuela Is Holding Military Exercises For 10 Days 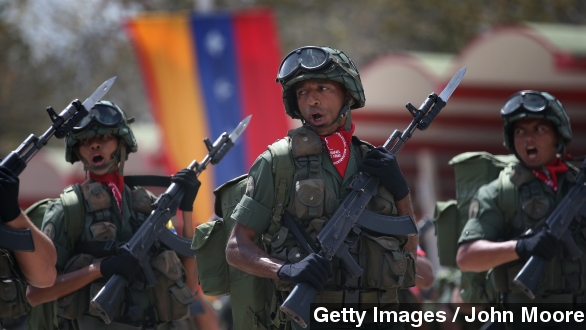 On Saturday Venezuela reportedly kicked off a series of military exercises — and Venezuelan broadcaster TeleSur reports those exercises are being conducted in response to the U.S. designation of Venezuela as a national security threat.

The military exercises will be held across the country and will involve 100,000 people according to Venezuela's defense minister — who described the drills as preparation for "imperial aggression."

This all comes after President Obama signed an executive order Monday "declaring a national emergency with respect to the unusual and extraordinary threat to the national security and foreign policy of the United States posed by the situation in Venezuela."

Over the past few weeks Venezuela's Leader Nicolas Maduro has made multiple claims that the U.S. is trying to stage a coup in his country, arrested a top leader of the opposition to his government, and told the U.S. to cut down its embassy staff in the country. (Video via VTV)

With the executive order, Obama imposed sanctions on seven Venezuelan officials who are accused of human rights abuses and free speech abuses.

In an address following the move Maduro called the seven sanctioned officials "heroes," and requested new executive powers from the Venezuelan congress to "defend peace, sovereignty, tranquility and the integrity of our country."

An op-ed in the New York Times says the sanctions played right into Maduro's narrative, "Suddenly, the United States is being cast again in the familiar role of the hemispheric bully ... And Mr. Maduro has taken on the mantle of victim, stirring up patriotic support at home..."

Maduro needs that patriotic support. His approval ratings have reportedly fallen to about 22% in January as the country's economy continues to struggle.

And Maduro has a lot to lose economically with this spat with the U.S. — the U.S. bought almost $26 billion in crude oil from Venezuela last year.

U.S.-Venezuelan relations have been tense since about 25 years ago stemming from the rise to power of Hugo Chavez, whose socialist policies and anti-U.S. rhetoric were never exactly popular in Washington — although they were very popular in Venezuela.

Some observers are worried the increasing tension between the U.S. and Venezuela will hurt the U.S.'s relationships with Latin America in general, and especially the ongoing Cuba talks. Cuba and Venezuela are close allies.

And Former Cuban leader Fidel Castro sent a letter to Maduro on Tuesday writing, "I congratulate you on your brilliant and brave speech against the brutal plans of the U.S. government."

U.S. State Department Spokesperson Jen Psaki said the U.S. doesn't have a response to the letter, but added:

"Discussions on the re-establishment of diplomatic relations with Cuba will continue as planned ... We are not promoting instability in Venezuela. Rather we believe respect for democratic norms and human rights is the best guarantee of Venezuela’s stability," Psaki said.

These Venezuelan military exercises will reportedly go on for the next 10 days. The U.S. has yet to comment on the move.