Why US-Backed Colombian Drug Policy Is On Its Way Out 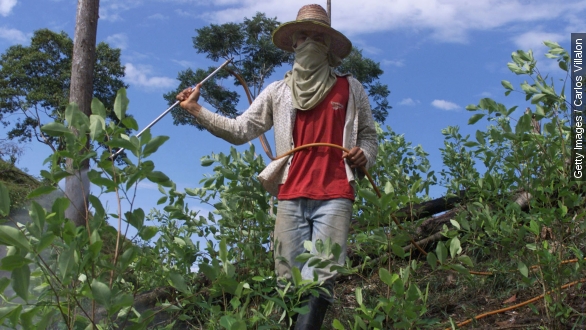 SMS
Why US-Backed Colombian Drug Policy Is On Its Way Out
By Kate Grumke
By Kate Grumke
May 7, 2015
A U.S.-backed anti-drug policy in Colombia could be terminated because of criticism from multiple fronts.
SHOW TRANSCRIPT

For more than 15 years, crop dusting planes funded by the U.S. have been flying over fields in Colombia, spraying Roundup to try to eradicate the coca plant used to make cocaine.

But now that program may be on its last legs as it faces growing criticism on multiple fronts.

Last week Colombia's president announced he wants to suspend the program, after the country's health ministry called for an end to fumigations, citing health concerns about the chemical that is sprayed to get rid of the plants. (Video via Presidencia de la República - Colombia)

That chemical is glyphosate, which is the most popular weed killer in the world, known by Roundup and produced by Monsanto. (Video via NTN24)

Colombia's health ministry cited a recent study from the World Health Organization's cancer arm that found that glyphosate is "probably carcinogenic" in humans, although Monsanto denies these claims.

And NPR reports the hazard assessment performed in the study asks, "Could a substance cause damage 'in some circumstance, at some level of exposure?' How commonly such circumstances or exposures actually occur in the real world ... is an entirely different question."

The coca crop dusting program has also faced criticism that it doesn't even work.

Adam Isacson, an outspoken critic of the program from the Washington Office on Latin America, says fumigation is just forcing coca growers to disperse throughout the country, and that other methods such as manually eradicating the plant, are more effective.

However, a recent report from the White House Office of National Drug Control Policy found that even as fumigation has decreased over the past few years, the amount of land being used to grow coca in Colombia increased by 39% last year. It went from less than 200,000 acres to nearly 280,000 acres last year.

Isacson told The New York Times the timing of the release of this report was no coincidence, saying, "I think the U.S. government is working hard to influence the decision to suspend the fumigation program."

But one of the U.S.'s main arguments against ending the aerial fumigation program is that it is safer than the alternative — walking through the fields and manually getting rid of the plants.

During such operations in 2010, the Colombian government reported 32 deaths and 150 injuries because of mines and attacks from the drug groups who are growing the coca. (Video via TeleSur)

The Washington Office on Latin America writes an effective way to eradicate coca is to have "greater government control of territory, which [allows] manual eradicators to work on the ground."