Why U.K. Party Leaders Are Fighting Over TV Debates 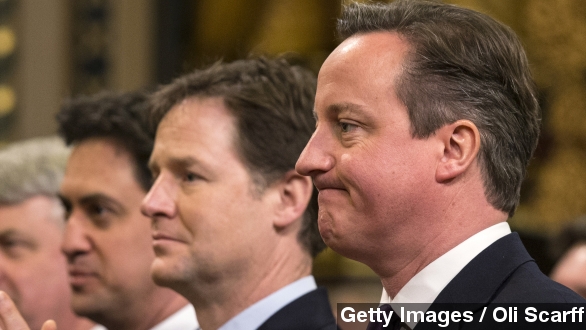 SMS
Why U.K. Party Leaders Are Fighting Over TV Debates
By Zach Toombs
By Zach Toombs
March 8, 2015
The U.K.'s first televised debate among party leaders aired in 2010. Now, the entire political spectrum disagrees about how debates should be done.
SHOW TRANSCRIPT

The United Kingdom has an election this spring. And Prime Minister David Cameron thinks one televised debate is enough.

"They're behaving as if they're pouring a drink in a drawing room in 'Downton Abbey,'" Nick Clegg said. "They ordain that they'll participate in only one debate."

"He said he wasn't going to allow any 'feeble excuses' to get out of the television debates," Ed Miliband said. "And now he's doing everything he can to stop them."

Until 2010, U.K. party leaders didn't even have televised debates.

It was considered too pageant-like, a product of American popularity contests not fit for the U.K.'s electoral process.

But when it finally did happen on Britain's soil, a lot of people actually watched — about 22 million in a nation of only 63 million.

Cameron's reluctance to get on stage again for three scheduled debates this spring is easy to explain: Polls have him out ahead of his rivals. He doesn't have much to gain by going head-to-head with them.

The end-result could mean Cameron skips two debates altogether, letting his opponents duke it out without him on the four major broadcast stations.

But keep in mind, when Britons vote, they're not voting for a single leader like Americans do — they're voting for a party. Yes, David Cameron and his conservative party are ahead in the polls, but they might not be ahead far enough to take sole leadership of the government.

Which means all these party leaders saying nasty things about one another might have to find a way to work together and form a coalition government.