Why Turkey Isn't So Crazy About The U.S. Anymore 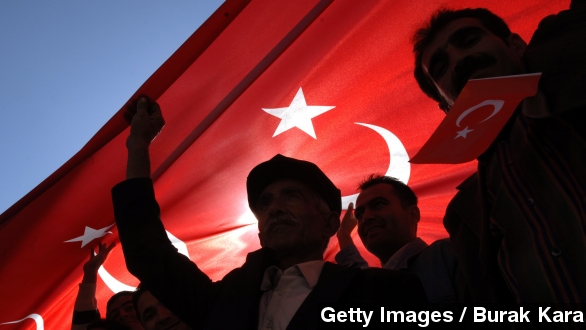 Joe Biden's visit to Turkey this weekend was met with protests, but where is it all coming from?

Well, there are a lot of answers to that question, but two things are pretty clear: The frustration at the U.S. has been building for a while now, and it's spread across Turkish society.

Crowds of protesters chanted, "Yankee go home" and "Biden get out" near where Biden met with Turkish President Recep Tayyip Erdogan in Istanbul Saturday. (Video via Fox News)

Biden's meeting with the Turkish president was ostensibly to discuss both countries' response to ISIS in neighboring Iraq and Syria, but many observers saw the visit as an effort to mend relations with Erdogan after Biden suggested Turkey allowed ISIS fighters to cross its border. (Video via Euronews)

As The Washington Post writes, the alliance between Turkey and the U.S. goes back some 60 years to the middle of the Cold War, when Turkey joined NATO with support from the U.S.

"So let me be clear: The U.S. strongly supports Turkey's bid to join the European Union."

That was President Obama addressing Turkish parliament in 2009 — pushing for Turkey to join the E.U., despite E.U. members' reluctance to accept its bid.

And as recently as August, the U.S. cleared a potential arms deal with Turkey to sell the country medium-range air-to-air missiles.

But a Pew poll from last year showed most Turks already didn't like the U.S., long before Biden made those comments. Then, only 21 percent of those polled had a favorable opinion of the U.S.

In fact, if you want to find an origin to the animosity, you'd likely have to go back more than a decade.

Veteran journalist Patrick B. Pexton points to Turkish opposition to the Iraq War as one of the primary reasons for anti-American sentiment in Turkey. "Turks feared two things: a destabilized Iraq on their long southern border, and that any U.S. action there would strengthen the hands of Kurds in Iraq."

The Turkish government especially didn't want the latter to happen because the Kurdish goal of forming its own state has manifested itself through terrorist attacks in Turkey. (Video via Vice)

The U.S. has supported the Kurds in northern Iraq since the Gulf War, and the Kurds have been on the front lines of the fight against ISIS over the past months. (Video via RT)

So Biden's comments about Turkey tacitly allowing ISIS to grow while the U.S. actively supports one of Turkey's enemies helps put the anger in perspective.

And that helps explain incidents like this one earlier this month, when two American sailors were attacked by a mob of angry nationalists. (Video via ABC)

The attackers put bags over the sailors' heads, referencing another sticking point in U.S.-Turkey relations — an incident in 2003 when the U.S. military detained and hooded a number of Turkish special forces.