Why This NFL Player Is Taking FanDuel To Court 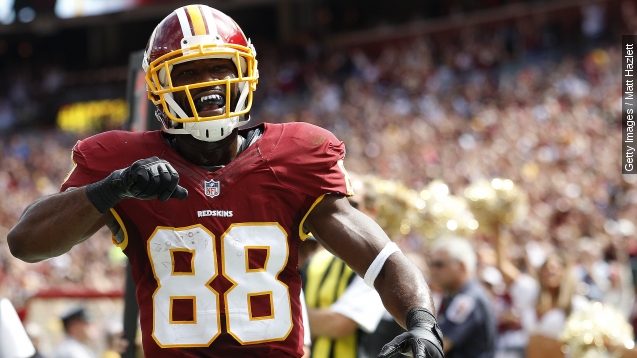 SMS
Why This NFL Player Is Taking FanDuel To Court
By Carter Woodiel
By Carter Woodiel
November 1, 2015
Daily fantasy sports has its latest adversary: one of the NFL players it features in its games.
SHOW TRANSCRIPT

From accusations about insider trading to FBI investigations, daily fantasy sports websites have been going through a lot lately.

Garcon, currently playing his eighth NFL season, filed a class-action lawsuit Friday against FanDuel, claiming the site has been using his name and likeness without permission. (Video via The Finish Line Inc.)

Garcon said in a statement: "FanDuel has taken the liberty to engage in these actions without my consent and without proper licensing rights," adding the site was seeing higher revenues thanks to the use of his likeness.

It should be noted Garcon is only suing FanDuel and not DraftKings, the other titan of daily fantasy sports. That's probably because DraftKings has an agreement with the NFL Players Association for marketing and licensing. FanDuel does not.

This past offseason, FanDuel signed advertising agreements with 15 NFL teams including Garcon's Washington Redskins. The agreements include stadium signage and advertising on team websites. (Video via Russell Athletic)

But FanDuel and other daily fantasy sites are still somewhat restricted on what they can and cannot use. For example, they can't use the NFL or team logos in their advertisements or on their sites. (Video via FanDuel)

FanDuel has been in hot water over the likenesses of football players before.

In late September, Deadspin found certain FanDuel advertisements used an image of Georgia Tech football players without permission. FanDuel later said a third-party advertising firm was responsible, and the photo was swapped out.

Compared to other players in the NFL who might have a beef with FanDuel, it's surprising to see Garcon step up. He heavily promoted the site on Twitter and Facebook during the 2014 season.

FanDuel has responded to Garcon's allegations, saying the suit is "without merit" because it goes against established fantasy sports practices.