Why This Flu Season Is The Worst In Years 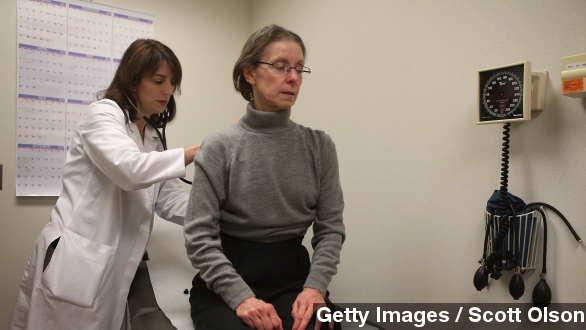 SMS
Why This Flu Season Is The Worst In Years
By Madison Burke
By Madison Burke
January 17, 2015
A vaccine that's proven only mildly effective and an early start for the virus is making this flu season especially harsh.
SHOW TRANSCRIPT

This flu season is being called the worst in years and has officially been labeled an epidemic by the Centers for Disease Control and Prevention. Experts say many factors are to blame.

Much of that blame is being placed on this year's flu vaccine, which officials now report is only 23 percent effective.

"Most of our patients who've gotten the flu have been vaccinated," a medical expert told WCBS.

A CDC official told The Washington Post that's the lowest percent effective since the agency began keeping track about a decade ago.

Normally the flu shot would prevent around 60 to 65 percent of cases, but this year's primary flu virus, H3N2, mutated, and the vaccine is unable to fully protect against it.

H3N2 is believed to be responsible for 95 percent of this year's flu cases. (Video Via CNN)

And the CDC says H3N2 is considerably harsher than other flu viruses, causing twice as many hospitalizations and deaths.

"In one week we went from 13 to 22 states being severely effected," Dr. Lolita McDavid said.

The flu generally peaks sometime between December and February, but this year we saw an unusually high number of cases in the beginning of December.

Experts say its too early to tell if the season has already peaked or if the number of cases will continue to grow.

But health officials are hopeful next year's flu season won't be as severe.

Experts will soon begin work on the flu vaccine for the 2015-2016 season. They say the mutated H3N2 virus will be covered in next year's vaccine.  (Video Via WCPO)

If the H3N2 mutation is the dominant strain once again, the new vaccine should be much more effective than this year's. (Video Via NBC)

Researchers are working on making a universal flu vaccine that would protect against all flu strains, even if they mutate. But that kind of vaccine likely won't be available by next year.