Why These Students Are Refusing To Pay Their College Loans 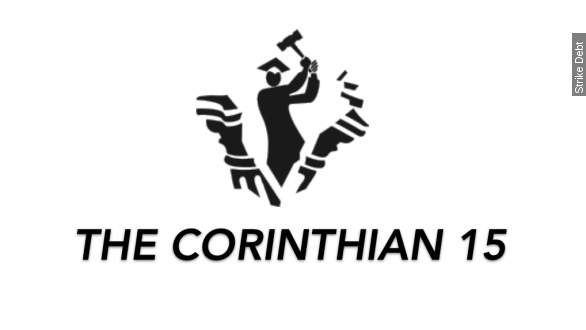 SMS
Why These Students Are Refusing To Pay Their College Loans
By Jake Godin
By Jake Godin
March 31, 2015
Students are heading to Washington, D.C., to protest what they say is unreasonable debt piled on by the for-profit Corinthian Colleges Inc.
SHOW TRANSCRIPT

These are the "Corinthian 15" — a group of former students who have, for the past month now, refused to pay their student loans.

They were all students of the now-bankrupt Corinthian Colleges Inc., which was forced to close more than 100 of its campuses last summer.

The students say they took in extraordinarily high debt for a relatively poor education and now face defaulting on their loans because they can't get jobs.

Corinthian Colleges fell under both state and federal scrutiny over false advertising practices and deceptive marketing in getting students to stack up debt. The company eventually had its access to federal education funds pulled. (Video via California Department of Justice)

Now, even more current and former students are joining the strike.

Where there were once 15, there are now over 100, as more have joined the Corinthian 15 in hopes of convincing the U.S. Department of Education to erase their student debt.

The group is meeting with the Consumer Financial Protection Bureau in Washington, D.C., Tuesday to hash out how exactly they could go about erasing their debts, which the bureau doesn’t have the authority to do — that's still up to the department.

And while this debt strike may be unique to Corinthian Colleges, the issue of burdensome student debt from for-profit colleges is not.

Last year, the Obama administration stepped up regulations on for-profit colleges, penalizing them if students walked away with too much debt and too few employment options. (Video via The White House)