Why The White House Wants To Track Imported Fish 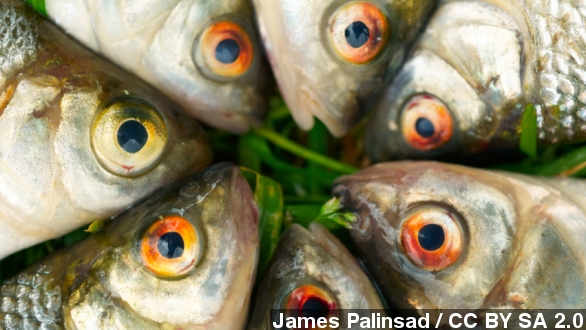 Those are the two main goals of the 40-page action plan: collaborating across agencies to monitor illegal fishing and tracing the origin of imported fish to combat seafood fraud.

Illegal, unreported and unregulated — IUU — fishing is the official designation that covers everything from fishing without the correct license to fishing for protected species. (Video via National Oceanic and Atmospheric Administration)

The administration says IUU fishing costs the industry between $10 billion and $23 billion each year. (Video via U.S. Coast Guard)

The action plan essentially lays the groundwork for collaboration between agencies.

For example, NOAA and the Department of State would work together to implement U.N. recommendations on port regulations — with NOAA presumably covering the domestic side and the State Department working internationally.

It's kind of like the Avengers, just instead of superheroes like Iron Man or Thor, you have the Federal Trade Commission and the Department of the Interior. (Video via Walt Disney Studios Motion Pictures / "The Avengers")

The measures would include requiring the regional governments of some international fishing grounds to pursue — among other things — monitoring fishing through satellite tracking, technology developed in part by Pew. (Video via The Economist)

The action plan would also use the Trans Pacific Partnership — another major item on the administration's agenda to further its goal: requiring member states to renounce subsidies that encourage overfishing. (Video via The White House)

While United Nations estimates rank the U.S. as one of the top fishing nations in the world, we still import around 90 percent of our seafood, and that brings us to the administration's next target. (Video via National Oceanic and Atmospheric Administration)

Seafood fraud — mislabeling one seafood product as something else.

Beyond the obvious problems this causes, like suppliers overcharging for subpar fish, it can also be dangerous.

Oceana's Dr. Kimberly Warner explained, "84 percent of the white tuna was actually escolar, which is something that can cause acute and serious digestive effects if you eat more than just a couple of ounces."

"Ultimately the consumer suffers and the fishermen," a man told WPDE.

So the administration's solution is ambitious: Track the fish, so by the time it reaches the U.S., the authorities have more information about it.

But that's going to take a while: Before the administration starts, it has to decide on what species are the most threatened by IUU fishing and fraud, something it hopes to have done by October.