Why The UK's Future Lies In Scotland's Hands 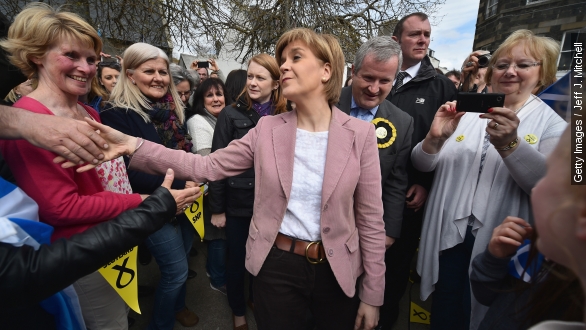 SMS
Why The UK's Future Lies In Scotland's Hands
By Matt Picht
By Matt Picht
May 6, 2015
The U.K.'s election campaign is almost over, and the Scottish National Party is set to have a huge say in shaping the country's next government.
SHOW TRANSCRIPT

Having lost last year's referendum vote on breaking away from the United Kingdom, the Scottish National Party will have to settle for the next best thing — taking over the country's government.

Or, such has been the rhetoric coming from the leaders of both big parties in the U.K.

Conservative party leader David Cameron told Sky News: "I think, genuinely, this is a very frightening prospect. ... She wants to break up the Westminster parliament and break up our country."

Both Cameron and Miliband have watched the rise of the SNP and its leader, Nicola Sturgeon, with dismay. The nationalist party is set to take the Scottish vote from Labour, winning as many as 56 seats in the new parliament.

That's important, because none of the other big parties are projected to win a majority of seats. They'll have to rely on minority party support to pass laws, and the SNP's on track to be one of the largest minority parties in the new government.

It's not clear how Sturgeon intends to parlay those seats into influence just yet. But at the very least, SNP support could be crucial to choosing the next prime minister and setting the policy agenda.

That's a problem for some British voters since the SNP still wants to break Scotland away from the U.K. A second independence referendum is probably out of the question for now, but SNP ministers could still work to weaken Westminster's hold over Scotland.

And the new SNP ministers will be voting on a lot of issues that don't directly affect their constituents. Many of Scotland's policies are decided by the region's local government thanks to previous devolution of powers agreements.

During her manifesto launch, Sturgeon told voters, "We will exercise that influence responsibly and constructively."

All told, it's not surprising Sturgeon's campaign has focused as much on reassuring non-Scottish voters as it has with winning Scottish votes. She argues the SNP's best option right now is to try and reshape British politics.

Sturgeon told BBC's Andrew Marr, "As long as Scotland remains a part of the Westminster system, it matters to Scotland that we get good decisions out of that system."

Her party's list of left-wing, anti-austerity priorities have struck a chord with many disenchanted Labour voters across the country.

But Sturgeon’s efforts to reassure the British populace ultimately won't matter in the short term. Like it or not, the Scots are coming to Parliament, and the U.K.'s political parties will have to figure how to work with them.

This video contains images from Getty Images and sound from tamerursavas / CC0 1.0.