Why The President Cut His India Trip Short For Saudi Arabia 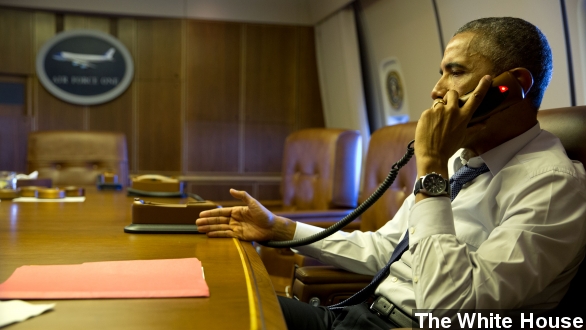 After an eventful couple of days in India, President Obama left the country for Saudi Arabia Tuesday. (Video via The White House)

The president visited Riyadh to meet the country's new king, Salman, and pay his respects his predecessor King Abdullah. (Video via Bloomberg)

The trip to the kingdom has drawn some scrutiny, especially considering the administration scrapped plans for a fourth day in India to make room for a visit to Saudi Arabia. (Video via Aaj Tak)

The White House took criticism earlier this month for not sending a high-level representative to a march in Paris, honoring those killed in the terrorist attacks there, so a visit to commemorate a leader with a spotty human rights record seems questionable.

Human Rights Watch's Adam Coogle said, "King Abdullah came to power with great promise but unfortunately after 2011 whatever small window had been created for tolerance for different views was swiftly closed. "

The kingdom's repression of freedom of expression, most recently through the public flogging of progressive blogger Raif Badawi, has drawn protests, as has the country's methods of capital punishment, which include beheadings. (Video via International Business Times)

For his part, the president has defended the U.S.'s close relationship with Saudi Arabia as the product of necessity.

"Sometimes we have to balance our need to speak to them about human rights issues with immediate concerns that we have in terms of countering terrorism or dealing with regional stability," the president told CNN's Fareed Zakaria.

As for the optics of visiting the country after missing out on Paris, Politico explains the circumstances played a big roll.

For one, the administration had more time to plan the Riyadh visit, "The White House avoids having Obama and Biden out of the country simultaneously," and "Attending the Paris march would have required putting Obama in the open-air event in a way that the Secret Service never likes."

In any case, the president won't be staying in Riyadh for long — he's expected back in Washington on Wednesday.