Why The Palestinian President Declared The Oslo Accords Null 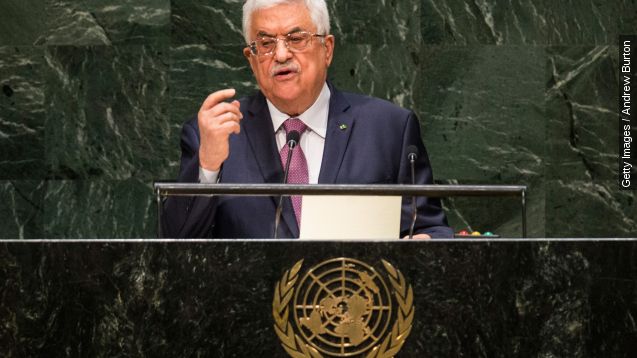 With the Palestine flag flying high at the United Nations General Assembly in New York for the first time, Palestine President Mahmoud Abbas said Wednesday his people were no longer bound by the over 20-year long peace agreement with Israel. (Video via Al Jazeera)

That means the Oslo Peace Accords, which were thought to be the region’s hope for peace and stability, will no longer be the law of the land — in theory. Palestine has yet to set up a plan to dissolve the peace agreements.

The declaration is more symbolic. Palestine wants the change soon after waiting over two decades for the Oslo agreements to take shape.

During those two decades, Israel and Palestine agreed to cooperate and fight together against terrorism. But the main issues were never resolved. There isn't a clear arrangement of border lines, Jerusalem is still not clearly divided, and Palestine hasn't been recognized as an independent state.

The Oslo agreements had aimed at getting these issues resolved five years after the Oslo talks concluded. Twenty-three years later, though, there's still no formal agreement — and Palestine doesn't want to wait any longer.

The last round of negotiations collapsed in 2014, and now the entire peace agreement has been declared null by Abbas. (Video via CCTV)

But Abbas did have one exception to the threat — international protection. If the international community helps Palestine fend off violence, the treaty will remain intact.

He claims his actions are driven by the continuous aggression hitting the people of Palestine.

"The occupying power continues to impose a strict blockade of the Gaza Strip to target Palestinian civilians … persisting with its war on aggression," said Abbas.

The room may have applauded Abbas’ speech, but some weren't happy. Israeli Prime Minister Benjamin Netanyahu called the speech "deceitful" and said it was proof Palestine doesn't wish to reach a peace agreement.