Why The NHL's Concussion Problem Is Overshadowed 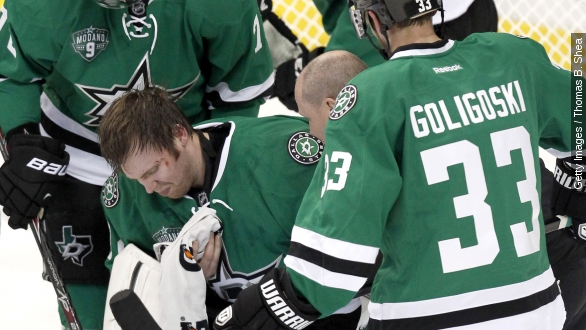 SMS
Why The NHL's Concussion Problem Is Overshadowed
By Matt Moreno
By Matt Moreno
March 26, 2015
A Minnesota federal judge ruled Wednesday in favor of a concussion lawsuit brought on by former NHL players.
SHOW TRANSCRIPT

While the NFL tends to get all the attention and criticism over concussions, there's another, just as important, concussion discussion raging in the NHL.

Late Wednesday, a U.S. federal judge ruled a concussion lawsuit brought on by several former players was valid, denying the NHL's attempt to get the suit dismissed.

The class action lawsuit alleges, similar to the one filed against the NFL, that "the NHL was motivated to conceal these risks in order to glorify violence in the sport and generate billions of dollars in revenues, often using extreme violence as a commodity in the sale and promotion of the League."

It was originally filed in 2013, shortly after the NFL settled its own concussion lawsuit out of court for a whopping $765 million.

It also comes about two years after three former NHL players, well-known for their fighting during games, committed suicide within months of one other.

In a 2012 piece, Global News spoke with several former NHL players about their issues with concussions.

"There's been times I was sitting in the penalty box, and I couldn't read a scoreboard. It was scary because you didn't know why you were depressed because you should be at the top of the world," former NHL player Ryan VandenBussche said.

The NHL has kept relatively quiet about the whole situation, and now the former NHL players filing the lawsuit want that to change.

"We recommended not having fights on the dropping of the puck ... and it was the players who resisted doing that. ... The players believe it's a term and condition of their employment and that they have a right to sign off on those things," Bettman told The National in a 2013 interview.

As for why the NFL's concussion problems seem to get so much more attention than the NHL's, a writer for the International Business Times says you can blame that on TV ratings.

NFL games bring in an average of 17.6 million viewers per regular-season game. The NHL tops out considerably lower at just 1.7 million.

ESPN reports there's no timetable on when the judge will rule on the NHL's other dismissal motion regarding labor law pre-emption.