Why The L.A. Dodgers Are Making So Many Moves 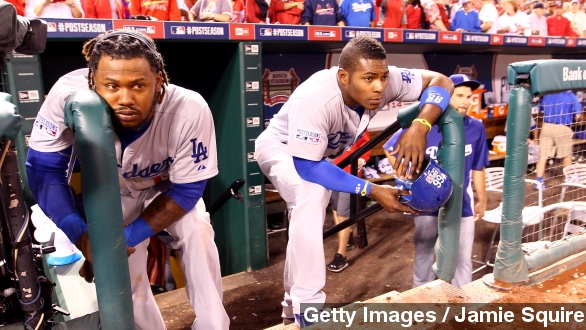 SMS
Why The L.A. Dodgers Are Making So Many Moves
By Matt Moreno
By Matt Moreno
December 11, 2014
The Los Angeles Dodgers have already made a number of acquisitions in the last few days and they may not be done.
SHOW TRANSCRIPT

The Los Angeles Dodgers are making quick work at the Winter Meetings, dealing prominent players from their starting lineup last year and acquiring others.

Then on Thursday, the Dodgers officially traded second baseman Dee Gordon, starting pitcher Dan Haren and shortstop Miguel Rojas to the Miami Marlins for a slew of prospects.

Then, they flipped one of those prospects, pitcher Andrew Heaney, to the Los Angeles Angels for second baseman Howie Kendrick.

The Dodgers are also reportedly sending outfielder Matt Kemp packing for down South in a trade with the San Diego Padres and are bringing in 2007 MVP shortstop Jimmy Rollins in a separate trade with the Philadelphia Phillies.

Like we said, they've been busy. ESPN's Buster Olney summarizes just why the Dodgers might be making so many moves.

"It's a cleanup on two fronts. No. 1, the defense. It is unusual a team like the Dodgers who had the highest payroll in baseball last year to be so poor defensively. ... On top of that, it is clear the front office is working to change the clubhouse culture," Olney said.

Despite finishing with 94 wins last season, the Dodgers made an early playoffs exit after losing to the St. Louis Cardinals 3-1 in the NLDS. And the Dodgers' new ownership is making it clear they want to do better than that.

It's been about two and a half years since the Dodgers were sold, and the team has been spending money ever since.

Last season, the Dodgers touted the biggest payroll in the MLB — an estimated $202 million, according to Baseball-Reference.com.

Now the team is under new leadership and possibly a new direction. President of Baseball Operations Andrew Friedman took over in October.

And the Dodgers might not be done adding and subtracting. They're also rumored to be in the mix for several other high-profile free agents and trade candidates like Cole Hamels, James Shields, and Sergio Romo.

The Dodgers face stiff competition in the NL West and will deal with World Series defending champs San Francisco Giants all year. Dodgers opening day is set for April 6.