Why SpaceX Is Trying To Land A Rocket On A Barge 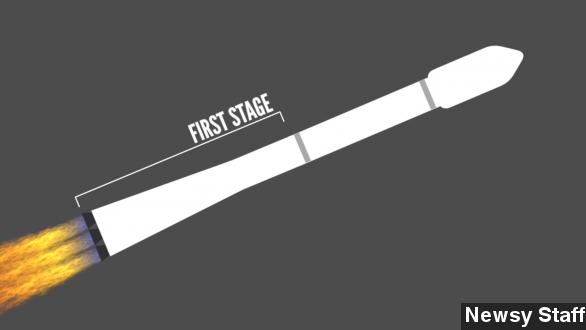 When the SpaceX Falcon 9 rocket carrying NASA's DSCOVR satellite launches on Sunday afternoon, its mission will go beyond carrying the satellite into space.

After launching the satellite, the rocket will then turn around in space, re-enter the atmosphere and try to make a safe landing on a floating landing pad in the Gulf of Mexico. (Video via SpaceX)

The company is trying to preserve the first stage of the two-stage rocket, which carries nine Merlin engines and their fuel tanks, so it can be re-used in later missions.

If that seems like a tall order — landing a rocket, vertically, on a 30,000-square-foot platform — it is. And SpaceX's previous attempt didn't exactly work out.

On Jan. 10, the company launched a rocket carrying one of its Dragon capsules with supplies for the International Space Station and attempted to land the rocket after re-entry. (Video via NASA)

Although the delivery part of the mission was successful, the landing wasn't, really. The rocket hit the landing pad too hard and exploded. (Video via Twitter / @SpaceX)

Because the landing pad is autonomous, no one was hurt in the crash, and as SpaceX CEO Elon Musk explained on Twitter, it provided valuable insight — specifically about the rocket's four grid fins, which will guide the rocket through the atmosphere. The fin mechanism ran out of hydraulic fluid during the landing, leading to the crash. (Video via SpaceX)

The reason behind SpaceX's efforts to preserve its Falcon 9 rockets is pretty straightforward: money.

On its website, SpaceX says launching a Falcon 9 costs $61.2 million, and a Falcon Heavy model, which has additional rocket boosters, goes for about $85 million. (Video via NASA)

The company says the majority of that launch price comes from building the rocket, so creating a reusable rocket could drastically lower the price of spaceflight.

This video includes an image from NASA / Glenn Benson.