Why Some Americans Sympathize With The Oregon Militia's Cause 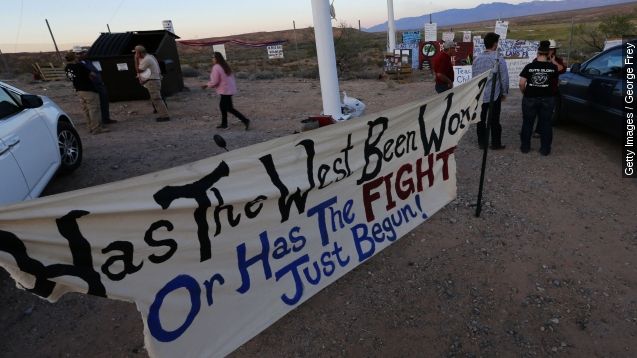 The standoff in Oregon might be your first time hearing about the movement to kick the federal government out of public land.

If so, it might also surprise you to learn just how much support the movement has — though that support doesn't seem to extend to taking over buildings. (Video via KIVI)

"We are setting ourselves up to help the citizens here in Harney County to reclaim their lands back," one member of the group told NBC.

The reasons range from conspiracy theories to disgust at environmental laws to fundamental disagreements about the role of the federal government.

Ammon Bundy, one of the militia's leaders, says the constitution strictly limits federal land use.

"They can only use it for 'the erection of forts, magazines, dockyards and other needful buildings.' You'll notice that it does not say 'wilderness areas,' 'national parks,' 'refuge areas,'" Bundy said in a YouTube video.

That's a common argument, though, so far the Supreme Court hasn't agreed.

That doesn't mean the issue is settled. Utah passed a law in 2012 requiring the federal government to transfer the majority of federal land to the state, although it hasn't sought to use the law yet. (Video via U.S. Forest Service)

Land transfers also came up during the 2014 Colorado governor's race, and Republican Party platforms in several Western states have explicit calls to hand over federal land for mining, logging, ranching and other uses. (Video via KJCT)

Several Republican presidential candidates have expressed either sympathy or outright support for the cause.

"There's no reason for the federal government to own 84 percent of the state of Nevada," Ted Cruz told the Las Vegas Review-Journal.

But Ted Cruz has also called for the Oregon group to stand down, and many who support the group's goals say this isn't the way to achieve them.

This video includes images from Getty Images, Gage Skidmore / CC BY SA 2.0 and Architect of the Capitol.