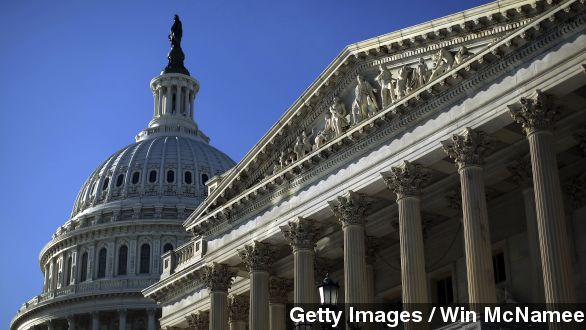 SMS
Why Senate Halted NSA Surveillance Reforms
By Evan Thomas
By Evan Thomas
November 19, 2014
The USA FREEDOM Act would have ended much of the NSA's surveillance activity, but it didn’t collect enough votes to proceed through the Senate.
SHOW TRANSCRIPT

The U.S. Senate voted Tuesday to drop legislation that would have put the brakes on NSA surveillance.

The USA FREEDOM Act is self-explanatory, if convoluted. It stands for the Uniting and Strengthening America by Fulfilling Rights and Ending Eavesdropping, Dragnet-collection and Online Monitoring.

Democratic Sen. Patrick Leahy sponsored the legislation, which would have ended bulk collection of phone records, appointed a special advocate to the secretive FISA court and declassified its major decisions.

An earlier version of the bill passed in the House back in May. (Video via C-SPAN)

But Tuesday's 58-42 vote put the bill just two votes shy of the 60 votes needed for the Senate to take up the legislation.

Politico attributed the outcome to "a wall of Republican opposition," but Ars Technica notes "the bill had widespread support ... including the director of the NSA."

A policy analyst at the Brennan Center for Justice told The Verge this bill is "a rare creature. You can't push it too far without losing that critical support from both sides." Sen. Leahy spoke on the floor Tuesday:

VIA OFFICE OF SEN. PATRICK LEAHY: "We have wide bipartisan agreement in both the Senate and the House that the bulk phone phone records collection program is not essential. It violates Americans' privacy. It has to end."

But The New York Times quotes Senate Majority Leader Mitch McConnell, who spearheaded opposition and suggested passage would eliminate a useful tool in the fight against terror. "This is the worst possible time to be tying our hands behind our backs."

A coalition of tech companies, unsurprisingly, threw their support behind the bill with an open letter before the vote.

And now that it's over, the Electronic Frontier Foundation is urging the Senate to take up the bill again while there's still time in the legislative session.

Despite this stall, Congress is expected to act on surveillance by June of 2015 — when the legislation that legalizes the NSA's phone collection activities is set to expire.