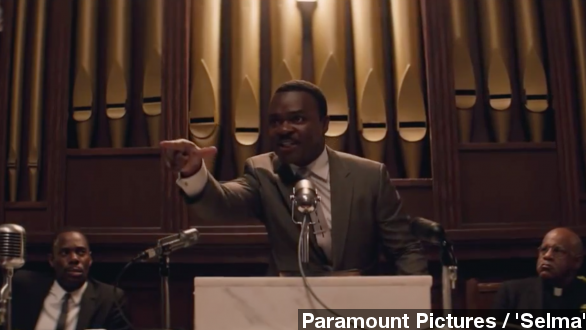 "It is unacceptable that they use their power and keep us voiceless," David Oyelowo says in the film "Selma."

Instead Oyelowo will be reading director DuVernay's reimagining of the iconic civil rights leader's legendary speeches. The reason?

King's estate, which has closely guarded its copyright of his words and thoroughly pursued those who they say have violated it.

"Selma" couldn't get permission to use the speeches, so DuVernay had to get creative and produce what The Guardian says is arguably her most important contribution to the film.

King's estate's strictness when it comes to King's speeches was in the spotlight last year, when the 50th anniversary of the "I Have a Dream" speech rolled around.

CNN managed to get the rights to show the speech, although, as The Huffington Post's Jason Linkins points out, they probably had to pay a pretty penny. (Video via CNN)

King's estate has been so thorough, it even managed to take King's words out of the U.S. National Archives. Just look at what happens in James Blue's 1964 documentary "The March."

King's family actually got all of King's words redacted, leaving only the sounds of cheering and clapping during and after the speech.

If that seems ridiculous to you, you're not alone. A number of critics have called for King's words to be entered into the public domain, both because of their historical significance and the fact that they were delivered before a large audience.

Alex Pasternak wrote a pretty in-depth explanation of why and how it's protected back in 2012, describing how Dexter King, who chaired the King estate, sold the rights to the speech to EMI in 2009, despite the objections of his sister Bernice and brother Martin.

Although the estate has said the move to copyright the speech was to preserve King's legacy, it has since been licensed to advertisements for Nike as well as a French phone company.

But not to "Selma" — although that doesn't seem to have hurt the movie, which is currently boasting a 100 percent rating on Rotten Tomatoes.