Why Samsung Had To Respond To Bendgate 2.0 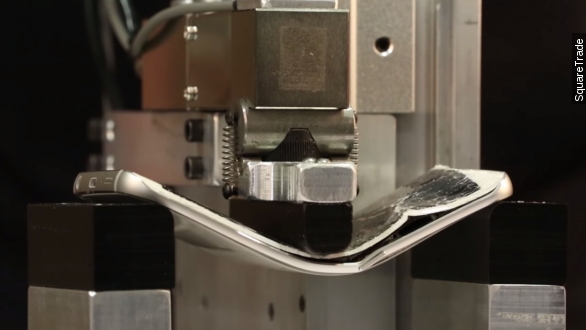 SMS
Why Samsung Had To Respond To Bendgate 2.0
By Matt Picht
By Matt Picht
April 6, 2015
Samsung is fighting back against a new video showing the company's Galaxy S6 phone bending under extreme pressure.
SHOW TRANSCRIPT

It's time to talk about bendable phones again. I'm sorry.

So, over the weekend SquareTrade, a company which sells warranties for electronic devices, decided to put the new Samsung Galaxy S6 Edge through a durability test, similar to the ones we saw the iPhone 6 going through during last year's #Bendgate scandal.

The result? Samsung's phone folds under just as much pressure as the iPhone 6 — 110 lbs. — and it also suffers some nasty screen damage if you put pressure on the front.

But while it's always fun to watch someone else's $600 phone crumple like a sheet of paper, the odds that your phone will ever experience 110 lbs. of direct force during its lifetime are slim. So, this video isn't anything to freak out about, right?

Wrong. Samsung's PR team released a statement contesting the SquareTrade video's conclusions and calling for a retrial. The press release was accompanied by a video of Samsung's internal stress test which showed the phone withstanding 80 lbs. of pressure — which the company helpfully informs us is enough force to snap five pencils in half at once.

Which is a pretty robust response to what a DroidLife writer described as "a video from a phone insurance peddler trying to grab headlines and scare you into buying their phone insurance." Several other outlets have also characterized Samsung's response as a slight overreaction.

But no matter how much stock you put in SquareTrade's video, Samsung couldn't afford to ignore a bend controversy directed at their phones. Not after how they responded to the last bendgate.

When Apple was under fire for bendable smartphones, Samsung took full advantage of the situation. The company tweeted about it; a Samsung exec took a shot at Apple for it during a major product launch; Samsung even shoved its phones underneath a robotic butt to prove their durability.

The controversy eventually forced Apple to pull back the curtain on some of their own in-house phone-bending tests. So it'd be supremely embarrassing for Samsung to get hit with a similar scandal and not respond in kind.

Ultimately, bendgate 2.0 will probably leave us with the same lesson the first one did — never leave your phone unattended near a robot designed to break phones.

Oh, and if this little tweet is any indication, LG phones should probably be next on the karmic chopping block.