Why Rolling Stone's UVA Story Might Distract From The Issue 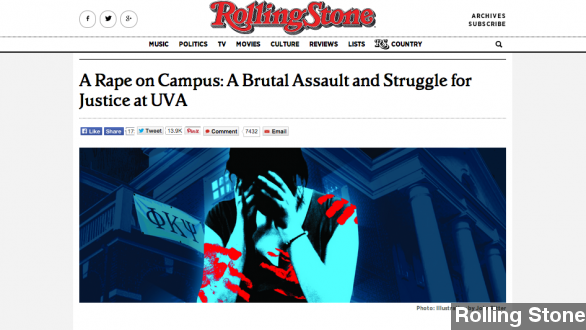 Rolling Stone's November article about an alleged rape on the University of Virginia campus told the emotional story of a young woman being tricked, viciously assaulted and then swept under the rug by the administration.

But journalists digging into the story are starting to ask some questions, saying the reporting might not have been up to par — or worse, the story could be a hoax.

Sabrina Rubin Erdely's story about an alleged 2012 on-campus gang rape details the sexual assault of a young woman named Jackie. It reads in part, "She remembers the men's heft and their sour reek of alcohol mixed with the pungency of marijuana. Most of all, Jackie remembers the pain and the pounding that went on and on."

Erdely's story is written almost exclusively from Jackie's perspective and doesn't include any statement — or even a "no comment" — from the group of men involved. And that's where commentators began to question Erdely's story.

A Slate writer explains how it's customary in journalism to get both sides of a story, and if you can't, you say you tried and mention how you tried. Erdely later explained she did attempt to get in contact with the men, and said this about Jackie's claims in a recent Slate podcast appearance:

But along with not talking to the perpetrators, a Washington Post reporter points out Erdely didn't name witnesses and began "hedging" by saying things like, "I wasn’t in that room. I don’t know and I do tell it from her point of view.”

Others went so far as to call the story a fake or a "hoax."

Erdely defended the story, saying the piece isn't an investigation, it's a look at how universities downplay sexual assault cases.

"The school says last year, 38 students went to the dean of students to talk about sexual assault allegations. Nine filed complaints. No UVA student has been expelled for sexual misconduct in the last decade," CNN's Joe Johns reported.

One professor backed Erderly telling The New York Times if there was a story about a robbery or a mugging at UVA, a reporter wouldn't be expected to interview an alleged perpetrator.

Regardless of whether Erdely got this particular story right, consider this: a 2009 survey of more than 5,000 undergraduate women found that 20 percent, or one in five women, experienced some type of sexual assault during their college tenure — and fewer than 15 percent report it to police.

In fact, the situation has become so dire, it grabbed the attention of The White House. President Obama announced a task force earlier this year to protect students from sexual assault.

But the backlash against Erdely's reporting seems to have shifted the narrative away from universities. A writer for the Columbia Journalism Review says, "If any questions are left partly unanswered, the story risks becoming counterproductive and ultimately supporting attitudes of skepticism and indifference." More plainly, any sign of bad reporting could make it that much harder for sexual assault victims to seem credible.

In the wake of the report, UVA's president has said the school will update its sexual assault policies. Since the perpetrators were a part of a fraternity, the school has also suspended greek life on campus and Jackie's case has been handed over to Charlottesville, Virginia police.

This video includes an image from Bob Mical / CC BY 2.0.