Why Researchers Say We Should Cut Back On Biofuels 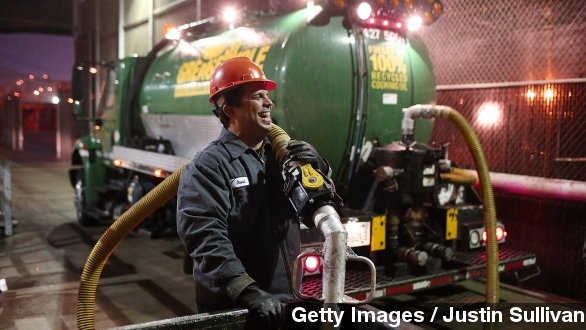 Biofuels are not a good alternative to fossil fuels. In fact, they're a pretty bad one. (Video via European Commission)

That's according to a new paper from the World Resources Institute, which says setting aside land for biofuel production will undercut efforts to combat climate change because it's an inefficient use for land that's already in increasingly high demand.

It works like this: The world currently has a big gap between the amount of food we're producing and the amount we're projected to need by 2050. People are working to close that gap sustainably. (Video via U.S. Department of Agriculture)

But there's only so much land we can use for food production; we're already using three-fourths of it, with the last fourth still occupied by wilderness and natural ecosystems.

Aside from interests like preserving biodiversity, we need that natural land to handle our carbon dioxide output and produce the air we breathe. (Video via Nature Conservancy of Canada)

So if we want to close the gap without destroying those remaining patches of nature, we have to get better about managing the land we're already using. And the paper says biofuels are just not cost-efficient. (Video via The Guardian)

The problem here is, two of the world's biggest carbon emitters — the U.S. and EU — are trying to produce more biofuels, not less.

The U.S. set a lofty goal of producing 21 billion gallons of advanced biofuels annually by 2022, which would be a huge step up considering the country produced just 1.3 billion gallons in 2013. (Video via ThisAmericanLand)

The European Union has set a goal for each country to have at least 10 percent of its fuel come from renewable sources like biofuels by 2020 as well. (Video via European Commission)

Given the inefficiency of biofuels — it takes a lot of land to produce only a little energy — the paper argues it will be much easier to close the food gap if we cut down on the fuel, instead of increasing production. (Video via University of Wisconsin)

In that context, it makes sense that the paper recommends governments cut subsidies for biofuel production and take better account of the carbon footprint the process leaves.

This video includes music from Chris Zabriskie / CC BY NC 4.0.